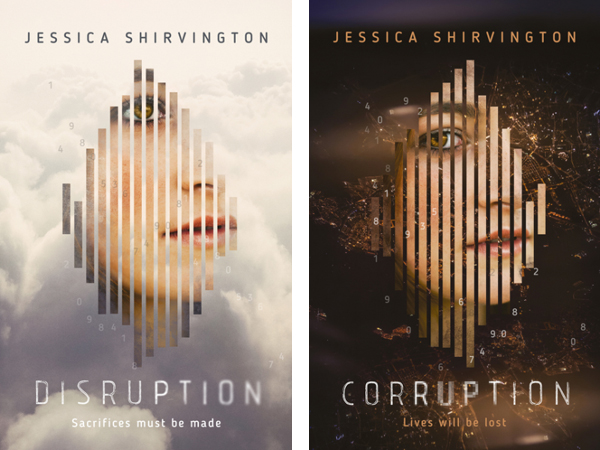 The Disruption duology by Jessica Shirvington was recently rereleased with new covers. Aren’t they just beautiful? I think they’re more representative of the story than the previous covers, even though they were extremely beautiful too! Let’s get into my thoughts on the two books.

Thank you to HarperCollins Australia for sending me review copies of the books. All thoughts and opinions are my own. 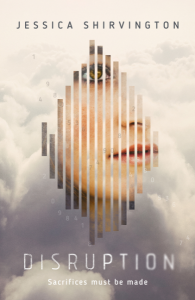 What if a microchip could identify your perfect match? What if it could be used against you and the ones you love?

Eight years ago, Mercer Corporation’s M-Bands became mandatory. An evolution of the smartphone, the bracelets promised an easier life. Instead, they have come to control it.

Two years ago, Maggie Stevens watched helplessly as one of the people she loved most was taken from her, shattering her world as she knew it.

Now, Maggie is ready. And Quentin Mercer – heir to the M-Corp empire – has become key to Maggie’s plan. But as the pieces of her dangerous design fall into place, could Quentin’s involvement destroy everything she’s fought for?

In a world full of broken promises, the ones Maggie must keep could be the most heartbreaking.

Disruption was a fantastic start to Jessica Shirvington’s dystopian duology. It was fast-paced and engaging, and has characters that you can’t help but root for.

The story begins 9 years after the US government made M-bands mandatory for all of its citizens. M-bands are a magnificent piece of technology that allows you to keep track of all things in life, including your heartbeat and other vitals, your medical history, your car keys (so to speak) and your money. Most importantly, M-bands allow you to find your true romantic match. As soon as you turn 18, your M-band is installed with Phera-Tech, which calculates a rating based on pheromones with everyone who has Phera-Tech activated within a certain distance. While you can have Phera-Tech turned off, each person must log at least four ratings each month and if four or more ratings are negative, you are taken to a rehabilitation camp because you are a ‘Neg’ and a danger to society. Or at least that’s what the public think.

Our main  character, Maggie’s father became a Neg overnight and was taken away two years ago. Since then, Maggie has been trying to locate her father by searching Neg camps and blackmailing people to help her. What Maggie’s discovered is that the rehabilitation camps are fake and the Negs are locked up in underground prisons and recruited into being soldiers and slaves… all controlled by the Mercer Corporation. In order to rescue her father, she must use Quentin Mercer and get him to empathise and open his eyes to the atrocities that his family is responsible for.

I absolutely loved the plot of this book. It was a really well thought out world and I highly enjoyed how the story unfolded. It was filled with twists that I never saw coming and I was really invested in everything that was going on. My criticism of the plot was that it dragged a bit in the middle section of the book. There wasn’t much happening for a large portion and it definitely felt like we had jumped from doing not much at all to the climax where everything was happening all at once. It was just missing a little bit of plot development for me. Having said that, it didn’t bother me too much because there was a lot of wonderful character development going on during this middle section of the novel.

I loved the characters in Disruption. Maggie starts off as a bit of a dislikeable and manipulative character who doesn’t care who she steps on in order to achieve her main purpose of rescuing her father. She blackmails those around her into doing her bidding and doesn’t care that she’s ruining other people’s lives in the process. However, Maggie’s growth throughout this novel was one of the highlights of Disruption for me. She develops lots of wonderful relationships with the people around her and it was wonderful to see her trust in them and confide in them. Her relationship with Gus, the black market computer genius and hacker, was so funny and they fought constantly like siblings. Gus was so snarky and had a great sense of humour. I loved his role in the book and how he became such a big presence in Maggie’s life.

And of course I loved Quentin, the love interest in the novel. He was just perfection – handsome, smart and most importantly, not evil. He brought out so many great qualities in Maggie and taught her to love and care about others. Even though their relationship started off a bit rocky, with Maggie manipulating him, I really enjoyed how their romance developed and I ship these two soooo much! It was a romance that had my heart racing and breaking throughout the book and I wanted to read more and more about them! And luckily, I could because there’s a sequel!

I’M NOW GOING TO GO INTO MY THOUGHTS ON CORRUPTION. THERE NO SPOILERS FOR THE FIRST BOOK, EXCEPT FOR THE SYNOPSIS THAT I’VE INCLUDED WITH THE BOOK INFORMATION. 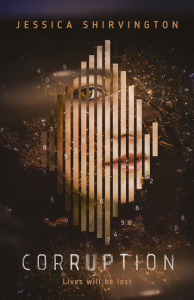 How do you live with yourself when you’ve deceived the one you love?
How do you move on when the person you’ve been fighting to save betrays you?

Four weeks ago, Maggie’s world fell apart, when she finally found what she’d been looking for. And when Quentin, who had blindly trusted her, unravelled her web of lies.

Now, Maggie lives in the dark. But she’s not about to stay there. Not when she still has to bring M-Corp down. Not when there is still a chance she could win him back.
In the exhilarating conclusion to Disruption, Maggie must do whatever it takes to show the world the truth. And the price for her quest?

Everything.
But for who?

I loved this sequel soooo much! I don’t think I have the words to express how invested I was in Maggie’s journey and her relationships with not only Quentin, but also her family and Gus.

Corruption picks up exactly where Disruption left off, and you’ll want to have this sequel on hand because the first book ends on a slight cliffhanger. The plot of this book was so incredibly intense! I felt like I was being knocked out of my seat with all the unexpected turns of events. Just like in Disruption, there weren’t very many things that were predictable to me and I found myself speeding through the book because I just had to know what was going to happen next. I found myself crying and shrieking a couple of times from all the feelings and emotions. It really was an intense and epic ride. Unlike Disruption, the plot in Corruption, progresses at a very even and nice pace. It never felt slow and even when there were some pauses for character development and relationship explorations, I could still feel the story and action progressing in the background. The story never felt stagnant and I enjoyed it right until the end. The climax of the story was so incredible and I still have so many feelings about it! And the ending itself was wonderful. The novel is completely resolved and there are no loose ends at all. The last two or three chapters are entirely dedicated to wrapping up the duology, which I really appreciated.

But as great as the plot was, again, it was the characters who captured my attention and my heart. I thought I couldn’t love Maggie, Quentin and Gus any more than I did in Disruption, but boy was I wrong! Maggie grows even further in this sequel and becomes such a fantastic human being who cares about others and actively takes steps to earn their trust. The relationship and the trust issues between Maggie and Quentin were beautifully explored and there are no words for how much I enjoyed it and love the two of them together. Their romance definitely made my heart ache but it was the best kind of ache. Their relationship is at OTP status for me right now. Quentin and Maggie forever!

That’s not to say that I didn’t love the other characters too. I loved Gus so much in this book. He was even more funny than he was in the previous book and I really enjoyed how much more page time he got. Corruption really explores the relationship between Gus and Maggie (no it’s not a love triangle) and what great friends would do for each other. It definitely brought tears to my eyes, as well as some uncontrollable sobbing. The book also brings some new side characters, some of whom I hated and others I loved. I especially enjoyed the addition of Liam in this book and I thought his backstory was so heartwrenchingly beautiful.

Overall, this book brought me a lot of emotions and feels. It was a really fast-paced and action-packed read that was a wonderful way to wrap up a fantastic dystopian duology. These are some of my favourite characters and relationships that I’ve read about all year and I highly recommend this duology!

7 thoughts on “Review: Disruption and Corruption by Jessica Shirvington”