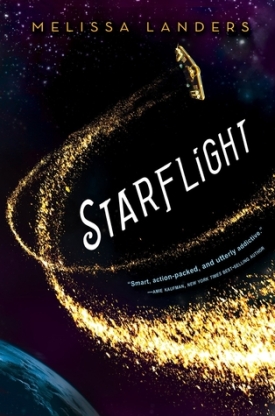 Life in the outer realm is a lawless, dirty, hard existence, and Solara Brooks is hungry for it. Just out of the orphanage, she needs a fresh start in a place where nobody cares about the engine grease beneath her fingernails or the felony tattoos across her knuckles. She’s so desperate to reach the realm that she’s willing to indenture herself to Doran Spaulding, the rich and popular quarterback who made her life miserable all through high school, in exchange for passage aboard the spaceliner Zenith.

When a twist of fate lands them instead on the Banshee, a vessel of dubious repute, Doran learns he’s been framed on Earth for conspiracy. As he pursues a set of mysterious coordinates rumored to hold the key to clearing his name, he and Solara must get past their enmity to work together and evade those out for their arrest. Life on the Banshee may be tumultuous, but as Solara and Doran are forced to question everything they once believed about their world—and each other—the ship becomes home, and the eccentric crew family. But what Solara and Doran discover on the mysterious Planet X has the power to not only alter their lives, but the existence of everyone in the universe…

Starflight is a fast-paced and addictive YA sci-fi novel. I was hooked from the very beginning and devoured the book in two short sittings because there was so much action and hilarity. I highly enjoyed the plot and the characters, but the standout for me was definitely the romance!

In this story, we follow Solara, who’s a criminal desperate for a new start in the Outer Fringes of the universe. But in order to get there, she needs passage on a ship and her only option is to indenture herself to her high school enemy, Doran Spaulding, heir to the biggest fuel company in the universe. But things quickly go wrong and the two of them find themselves on board the Banshee, which is home to a crew of misfits with their own secrets. What I loved most about the plot of this book was that it was nothing like what I expected going into the book. I started the story with an idea of what was going to happen but it deviated pretty quickly from what I expected. I enjoyed all of the action in the book and it kind of had everything: from space pirates to accidental marriages to betrayals to unexpected surprises at the end. I loved it all. I also really loved that the book was really funny. There was a lot of banter between the characters and some of the things that happened were hilarious.

The characters themselves were great and while I wasn’t sure about some of them at the start, I grew to love all of them really quickly. The crew were a family and it was hard not to fall in love with all of them. My favourite character was definitely Doran. He was super cute and I loved his learning curve in the novel. He really developed from a bratty rich kid into a wonderful and loyal man. I also really enjoyed Solara throughout the book. She did annoy me a little at the start but it was impossible not to relate to her and fall in love with her character and personality. I also loved the crew members, especially the first mate, Renny. He’s a kleptomaniac and steals the most random things because he can’t help it. I thought he was so funny and I loved him to bits. And of course, I really enjoyed the Captain, who has a pet sugar bear that he pretends not to love but secretly does. I just loved them all.

She’d learned that home was a fluid thing, and whether on a planet, on a satellite, or on a rusted bucket of a ship, this crew was her home.

The romance in the book definitely had my attention from the start. One of my favourite romantic tropes is hate to love and this book executed it perfectly. The development from enemies to friends to lovers was perfect and I shipped Solara and Doran sooooo hard. I cannot wait for the sequel, Starfall, to come out so that I can see my two babies together again.

If you’re looking for an addictive space opera, look no further. Starflight is absolutely amazing and it’s honestly embarrassing that I’ve had it for so long and only just picked it up now. It’s a fast-paced and light read and perfect for anyone who just wants a bit of action and fun.