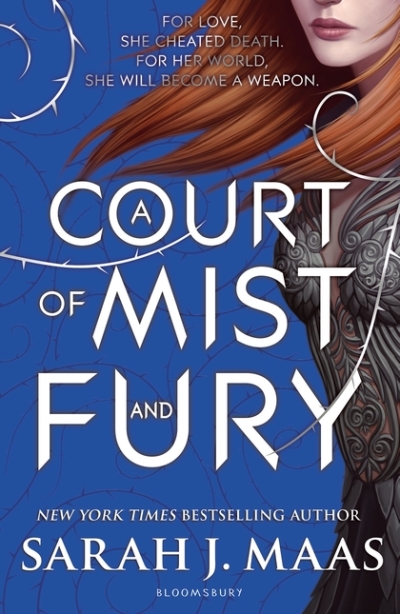 A Court of Mist and Fury is the sequel to A Court of Thorns and Roses, which means that this review will contain some major spoilers. If you haven’t read ACOTAR, please leave and read my review for that book instead!

Also, there are spoilers for the romance/ship in this book, so if you haven’t been spoiled already, please continue no further.

A COURT OF MIST AND FURY SYNOPSIS

After rescuing her lover Tamlin from a wicked Faerie Queen, she returns to the Spring Court possessing the powers of the High Fae. But Feyre cannot forget the terrible deeds she performed to save Tamlin’s people – nor the bargain she made with Rhysand, High Lord of the feared Night Court.

As Feyre is drawn ever deeper into Rhysand’s dark web of politics and passion, war is looming and an evil far greater than any queen threatens to destroy everything Feyre has fought for. She must confront her past, embrace her gifts and decide her fate.

She must surrender her heart to heal a world torn in two.

Thank you to Bloomsbury Australia for sending me a copy of this book. All thoughts and opinions are my own.

I’m a little bit of a black sheep here. I didn’t really enjoy this book as much as everybody else has seemed to. It’s certainly my least favourite of all of Sarah J. Maas’s books. But having said that, there were still things that I enjoyed about it. The writing was addictive and made me want to keep reading, and I’ll probably still pick up the final book of the trilogy when it comes out.

This book begins a few months after our main characters have escaped from Amarantha and Under the Mountain. We see both Feyre and Tamlin dealing with PTSD, which I thought was great. It’s not often at all that we see fantasy characters suffering from PTSD, despite all the hardships and trauma that they must go through. However, one of my biggest qualms with this book was how unresolved the PTSD was. After about 150 pages, Feyre’s PTSD is almost forgotten or magically resolved when she moves to a different area of the world. There were some hints of her being anxious or scared after she had initially moved but soon there was no evidence of her trauma at all. It felt very “love cures all” (or loving environment cures all) to me.

The characters in this book were the main issue for me. I didn’t like Feyre, Tamlin or Rhysand in this book and couldn’t connect with any of them. Let’s start with the complete 180 that Tamlin’s character took. Sarah J. Maas pretty much turned Tamlin into an oppressive overlord within a couple of chapters of the book. HIs character was completely different to who he was in ACOTAR, and I really did not enjoy that at all. Sure, a traumatic experience like the one the characters went through in ACOTAR has the ability to change people, but I would have liked to have seen this change in the book. Because the novel begins a few months after the events in ACOTAR, we don’t get to see these changes so this sequel just felt very disconnected from the first book. I also didn’t like Rhys in this book very much. He was a manipulative and deceptive person, disguised as a sweet and caring guy.I was not enamoured by him at all, though I do have to admit that he grew on me a little towards the end when he finally started opening up.

My least favourite character in this novel was actually Feyre. I found her to be judgmental and hypocritical, and just very frustrating. I really disliked how she ran away from her problems at the first sign of trouble and never bothered to work things out. It was always her way or the highway. I like my characters to be fierce and independent but I felt like she was just acting out and being a brat most of the time. She was definitely a bit of a special snowflake with invincible powers. Her magical abilities manifested at the most convenient of times, and for the first two-thirds of the book, she was able to use her powers in life-or-death situations with almost no training. It really made my eyebrow twitch. I also don’t really like that she’s kind of all-powerful. She’s able to control all the elements as well as shape-shift and read minds (and probably any other thing you can think of).

But what I disliked the most about the characters were the relationships between them. I don’t really know how to express my thoughts without spoiling…but at this point you probably already know that this book is a Feyre and Rhysand story. I was really bothered by how quickly Feyre rejected Tamlin based on one problem that she had with him. It really made me wonder what the purpose of the first book was because it was pretty clear from the first 100 pages that the whole book was going to be about Rhys. If you’re a Tamlin fan, you will probably be bothered by how quickly Feyre dismissed Tamlin and how she didn’t even try to express her concerns to him or give him a chance to redeem himself. I felt like the whole book was about how Tamlin fails in comparison to Rhysand because, for every good quality that Tamlin had, Rhys was 1000x better. Because of how underdeveloped this whole switch in ships was, it was pretty hard for me to be on board the Rhys ship since it felt very sudden and unresolved. I just don’t really understand how Tamlin went from being the love of her life to becoming the enemy. The whole book, to me, was just Feyre making excuses for why she thinks Tamlin is an asshole.

Because I didn’t really like the characters or the romance, I was relying on the plot to be amazing. And sadly it wasn’t. This book is really long and dragged out. There’s pretty much nothing that happens in this book and the things that actually did happen don’t really make sense. Rhys, Feyre and the Night Court take it upon themselves to secretly save the world against the King of Hybern, without consulting the other courts or forming alliances, even though it’s something that affects all of them. There were also a lot of things that were skipped over or glossed over so I never felt like I was in the story with the characters as they were trying to save their world. I did like that we got to go to different courts and see the differences between them. I would have liked it if we had stayed at those courts for a little bit longer, considering how much of the book is set in the same location in the Night Court.

Overall, this book was much more about the romance than it was about the plot. If you’re a Rhys fan, you will probably love this book. However, if you go into it expecting a really exciting plot, I think you’ll be a bit disappointed.

13 thoughts on “Review: A Court of Mist and Fury by Sarah J. Maas”