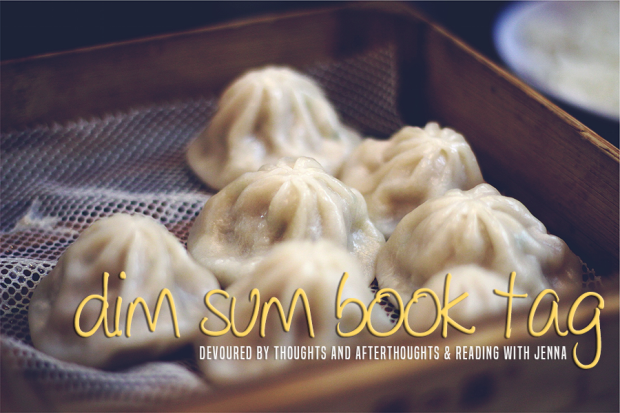 The Dim Sum Book Tag is the brainchild of Joey @ Thoughts and Afterthoughts and Jenna @ Reading With Jenna (mostly Joey and a little bit me). Dim sum is a style of Chinese cuisine whereby food is served in small (tapas-like) portions and is common during yum cha (which literally means: drinking tea). This tag is inspired by good company and good eats.

Here are some rules to devour this tag:

TEA: A BOOK THAT STARTED OFF HOT BUT TURNED COLD QUICKLY

When I first started The Selection by Kiera Cass, I was pretty intrigued by the world and the caste system. I don’t usually read dystopian trilogies, but it seemed like a fun one to try out. Sadly it went cold after the first quarter of the book. I was not interested in the love triangle at all, and America Singer is the most frustrating character to read about. But the bad plot and bad writing was so addictive that I read all the other books and even picked up The Heir…

CHIU CHOW DUMPLING: A BOOK THAT FEATURES ELEMENTS OF LAND AND SEA

Yep, the answer to this one has to be Six of Crows by Leigh Bardugo. I just finished reading this one yesterday and I LOVED it (a review has been written and will go live on Monday!).

This book takes place partly on land and partly at sea. In order to carry out a heist, our main characters need to travel from one place to another by boat. Water and swimming is just a massive part of this book!

Queen Levana from The Lunar Chronicles is probably my favourite villain. There’s so much more to her than meets the eye and I love that Marissa Meyer wrote a whole prequel dedicated to Levana’s story. Her character has so much depth and is so interesting to read about! She’s definitely done some terrible things but her past is so devastating. She’s the unloved child who was bullied by her older sister and I guess she just wants all her people to love and adore her, even though she goes about it the wrong way.

SHRIMP DUMPLING: A BOOK WITH A TRANSPARENT BLURB THAT GIVES THE STORY AWAY

I have already given this book away because I disliked it that much. Starry Night by Isabel Gillies is about a girl who falls in love with a boy at some fancy event and then he breaks her heart. That’s pretty much what the blurb of the book says and that’s pretty much all the happens in this book. From memory, the back of the book says something about overcoming heartbreak and first love… so the whole ending was ruined because I knew he was going to be a dick and break up with her.

STEAMED BBQ PORK BUNS: A BOOK THAT IS FLUFFY ON THE OUTSIDE BUT PACKS A PUNCH OF FLAVOUR (EG. MESSAGE? DEPTH? CONTROVERSY?)

If you judge My Life Next Door by Huntley Fitzpatrick by its cover and synopsis, it seems like a fluffy contemporary romance. And it is. But it’s also so much more!

My Life Next Door explores family dynamics so well. It examines the differences between different kinds of families, as well as the stereotypes that people may hold towards large, rowdy families. And it also has a great message about doing the right thing. I love this book!

Me and Earl and the Dying Girl by Jesse Andrews.

I really did not like this book. It was a 1 star read for me, but I also know lots of lots of people who do like this novel. I personally didn’t connect with any of the characters or the humour so I found the book to be utterly boring. But I know lots of readers who found this book to be hilarious, so I guess it’s a matter of whether the humour suits you or not?

I rarely receive books from anybody. I usually buy all my books and when I do get presents, it’s usually a gift card to buy books. When I give people books as gifts, I usually just wrap it in gift wrap so it’s nothing special…

I thought I’d just feature the illustrated Harry Potter and the Philosopher’s Stone. The jacket for this edition is absolutely beautiful and it has a built in bookmark!

EGG CUSTARD TART: A BOOK THAT USES SIMPLE INGREDIENTS AND CLICHES BUT EXECUTES IT PERFECTLY

I wouldn’t say that Carry On by Rainbow Rowell is full of cliches… but it does have lots of fantasy elements that I’ve seen before. Obviously, it has lots of parallels to Harry Potter, since it started off as a little bit of a parody of HP in Fangirl. But I thought Rainbow Rowell did such a fantastic job of creating an original story, even though it is simple and a little bit tropey. It’s one of my favourites of the year and I cannot stop raving about it. There’s also a discussion between me, Jeann and Aila over at Happy Indulgence

Simon vs the Homo Sapiens Agenda by Becky Albertalli.

I really need to reread this book again, but this time have lots of mini oreos on hand!

FRIED SESAME BALLS: A BOOK COVER WITH EMBOSSED TEXT/DESIGN YOU JUST LOVE TO RUN YOUR FINGERS OVER

The cover of My Heart and Other Black Holes by Jasmine Warga is amazing to touch! The cover is stitched and you can actually feel the bumps on the hardcover edition (I’m not sure what the paperback feels like).

When I first saw the cover I thought it was so weird that the text was off centre, but then I realised that they probably wanted to preserve all of the amazing stitching!

DIM SUM STEAM CART: THE TYPE OF CARRYING BAG YOU USE TO BRING BOOKS AROUND 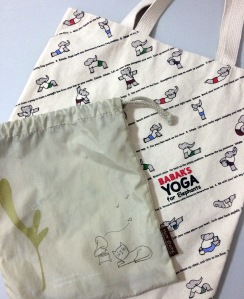 I usually use a tote bag as my every day bag and that’s what I carry my books in, I guess. I have a ridiculously large collection of totes… I think I have about 30 – 40. I switch totes almost every day but the one I’m using right now its a Babar: Yoga for Elephants tote.

I also use a mini book bag so that whatever I’m reading doesn’t get damaged in my tote. I’ve had so many terrible experiences with my keys scratching my books or denting the pages. I have no idea where I got this cat bag from… but it fits most books, including tall hardcovers. The only ones that don’t fit are tall and fat hardcovers. I use an Apple drawstring bag for those.

I INVITE TO YUM CHA:

(Tagging more than 5 because… I want to have dim sum fun with all of you!!)