I read quite a lot of books in September but I kind of got stuck in a bit of a slump towards the middle of the month. A Little Life was so good that I had a bit of a book hangover, and it also didn’t help that I read a string of books that were quite average after it. But let’s get into what I read because I still managed to complete my 150 book challenge on Goodreads (which I’ve now increased to 200 books).

I am currently reading Miss Peregrine’s Home For Peculiar Children by Ransom Riggs. Stay tuned for a review on that! 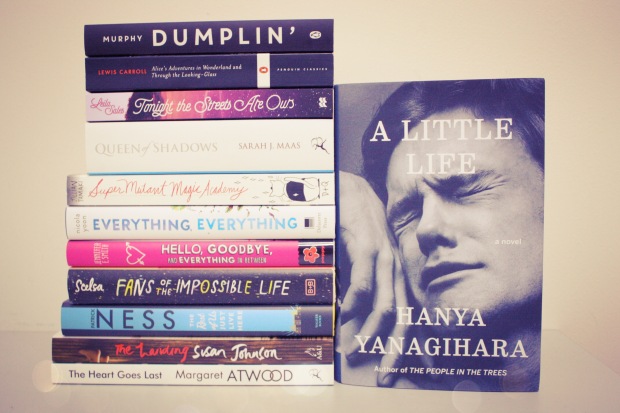 As always, these books are listed in the order that I read them during the month, and my reviews are linked.

This is the fourth book in the Throne of Glass series and it was so good! A really great continuation to the series and it ended so epically as well. Looking forward to Book 5!

2. Hello, Goodbye and Everything In Between – Jennifer E. Smith

This new contemporary release from Jennifer E. Smith did not disappoint. This book is about two high school graduates and their last night together as they try to figure out whether to break up or go long distance.

A fast-paced and cute contemporary about a girl with SCID. This book has received so much hype and it’s all well deserved.

This was by far the best read of September for me. It took me 2 weeks to read but it was so worth it! Check out my review for in depth thoughts because this book is not for everyone.

This was my first graphic novel in a while and it was just okay for me. I didn’t find it to be as funny as some other reviewers found it. It’s a very slice-of-life kind of book.

This was a really fun book about female friendships and getting revenge on the men who have wronged you.

A book about friendship and mental illness… I had many, many problems with not only the messages but also the writing style. Wasn’t really worth my time.

A book with a great message about body weight and confidence. I loved the messages in this book but there were some things that I wish had been better executed.

A really enjoyable book about a crazy road trip and friendship. There was a lot that I enjoyed about it but it was a bit too purple prose-y for me to fully enjoy.

I just realised that this book has pretty much the same title as the previous one, but this was a much better read. I saw this in the free books section on iBooks so I downloaded it to give it a go. It was a really charming and enjoyable book.

12. The Rest Of Us Just Live Here – Patrick Ness

My first Patrick Ness book did not disappoint. It had a great premise and was executed really well. This is a book about all the other kids in the world and what happens to them when the chosen ones are off saving the world.

A married couple living in a chaotic and anarchic world sign up to live in a utopia forever. They soon realise that this utopia is definitely more of a dystopia. A bit of a weird read for me. I still don’t really know how I feel about it.

14. Tonight The Streets Are Ours – Leila Sales

This is a love story, but it’s not about romance. It’s a book about loving yourself and putting yourself first. This was definitely the surprise of the month!

Set in a small coastal town in Australia, an exploration of the joys and disappointments of love and humanity.

16. Alice’s Adventures in Wonderland & Through the Looking Glass – Lewis Carroll

I don’t think this needs any introduction. I’ve read Alice’s Adventures in Wonderland before but this was my first time reading Through the Looking Glass. It was wonderful in parts but a bit draggy in others.

I did five Top Ten Tuesday posts this month:

I also did a giveaway this month to celebrate my birthday. And the winner of that giveaway was Kelly @ Dancing Through The Pages!

If you’ve done a September wrap up, leave me a link in the comments! I would love to check out what you’ve read! 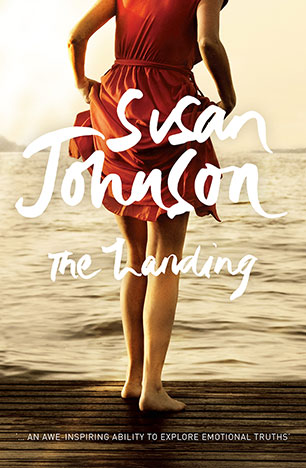 In one swift, blindsiding move, Jonathan Lott’s wife leaves him. What he and his daughters find even more confusing is that she has left him for a woman. How is it possible that Jonathan saw no sign of her unhappiness?

Wondering what he will do now, and knowing a life lived alone is not for him, Jonathan retreats to his beach house at The Landing. Is it true that an about-to-be-divorced man in possession of a good fortune is in need of a new wife? Would Penny Collins do, divorced herself, a school teacher and frustrated artist? What about beautiful, wild Anna, blown in from who knows where, trailing broken marriages behind her?

With passion, family splits and secrets, everyone seems to be looking for something. And Jonathan’s about to find out how much love matters.

Susan Johnson’s stunning new novel, written with her trademark wit and insight, brilliantly observes what it is to be human and to love: the betrayals, the long and the short alliances, the disappointments and the joys. The Landing celebrates it all.

I received a copy of The Landing from Allen & Unwin. All thoughts and opinions are my own.

The Landing is a wonderfully written book that explores the different sides of love and humanity, the idea of home and belonging, and appearances vs reality. It is a light and mostly happy novel that delves into some deep and heavy themes.

The book is set in a small coastal town called The Landing, near Brisbane in Australia. Our main character, Jonathan Lott, a 55 year old and almost-divorced construction lawyer, escapes to The Landing for the weekend to get away from his left-over feelings for his estranged wife. But The Landing is anything but relaxing. It’s a place full of gossipers and people who know everything about everybody who reside there. We soon come to realise though, that everybody has something to hide and that we only show a fraction of our true selves to the world.

She knew life was counterfeit and her new self was counterfeit, too. She sometimes felt breathless with an inner recklessness at what she, or anyone, could do. Why, everyone was fake; their public faces put on, every single day.

In this book, we see characters idealise and romanticise love, only to realise that reality is anything but ideal. We see characters dream about greatness and ambition, only to realise that they are no closer to their dreams than they were the day before. We see characters put on masks and acts of confidence in order to hide their own self-doubt. This book explores how each of us are trying to find our own place in the world where we can find a balance between reality and our dreams/appearances, a landing if you will.

There isn’t very much that happens in this novel. It’s an in depth exploration of the character’s lives and the different sides of human nature. There’s not much of a plot, which made me a little bit bored at times. I also had a little bit of a hard time getting into the book. The first 20 or so pages were very slow and I didn’t think I would enjoy the book at all. Thankfully, I really warmed up to the characters and started to enjoy all their stories and disappointments. This book also jumps back and forth in time, as we revisit past events, and I really enjoyed that it was written this way. There were scenes that felt very nostalgic and heartwarming.

The writing in this book was beautiful. Susan Johnson has such a way with words. I ate up every single word. The only problem I had with the writing were the lengthy paragraphs of descriptions of nature and the wind blowing and the flowers blooming and the birds calling. There were so many of these long-winded descriptions in the first 30 pages that I could not engage with the book. As we started to see more of the characters, these descriptions dropped off.

Despite what the blurb of the book may suggest, this is not a book about Jonathan Lott. While he’s one of the key characters in the novel, we see many other characters too. There’s Penny, who was once the most beautiful woman in The Landing, but now a divorced high school art teacher, whose daughter ran away (and then came back) with a man older than her own father. There’s Marie, Penny’s disagreeable mother, who was a refugee from France. There’s little Giselle, who’s neglected by her mother and has to take care of herself. The book is written from the perspectives of all of these characters and more. This was perhaps one of the biggest problems I had with the book. It jumped from one perspective to another too much for my liking. I would have much preferred to read from only two or three perspectives.

I thoroughly enjoyed this book but there were times when it felt a little bit draggy. I would probably have enjoyed it more if there was a little bit more action. I did love the pace and the tone of the book, and I really appreciated how much The Landing made me introspect and think about where I stand in the world.