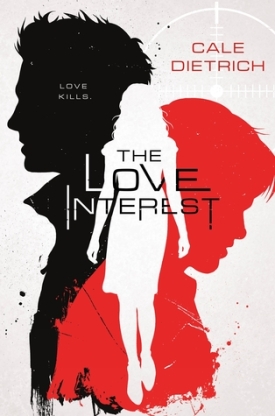 There is a secret organization that cultivates teenage spies. The agents are called Love Interests because getting close to people destined for great power means getting valuable secrets.

Caden is a Nice: the boy next door, sculpted to physical perfection. Dylan is a Bad: the brooding, dark-souled guy who is dangerously handsome. The girl they are competing for is important to the organization, and each boy will pursue her. Will she choose the Nice or the Bad?

Both Caden and Dylan are living in the outside world for the first time. They are well-trained and at the top of their games. They have to be—whoever the girl doesn’t choose will die.

What the boys don’t expect are feelings that are outside of their training. Feelings that could kill them both.

I love supporting Aussie authors and I was so excited to check out The Love Interest because it had an intriguing synopsis and a really stunning cover. But I was left feeling really disappointed because I don’t think the book lived up to its full potential.

The book is told from the perspective of Caden, who is a Love Interest. He grew up in this secret organisation where he was groomed to become a Love Interest to someone important or powerful enough to have an impact on the world. Love Interests are spies who are expected to report back to the organisation with secrets about their partners. However, in order to be in the lives of their partners, they need to first have a fight to the death with another Love Interest who is also vying for the attention and love of that partner. When the partner makes their choice, the Love Interest who has lost is killed. Caden and Dylan are Love Interests fighting for the love of Juliet, who is a genius scientist and inventor. But a friendship between them forms when they realise that nobody else in the world understands them better than each other.

I actually really liked the first 70 or so pages of the novel. I was captivated by the concept and the world of the Love Interest organisation and I found it to be addictive in a reality TV show/The Bachelor kind of way. But as I progressed through the book, I became a little bit bored with the lack of plot and the lack of development in the story. There wasn’t very much that happened and it just came across as a boy trying to get a girl to fall in love with him using very dramatic and unrealistic methods. I couldn’t connect with the story because of how unrealistic and cheesy it was. I struggled a lot of how little of a learning curve Caden needed to fit into the real world when he’s never actually been in the real world. He seemed to know exactly where to go at school and he seemed to have zero problems starting a job at Starbucks. I know Caden fitting into society wasn’t the focus of the book, but I was just extremely disconnected with everything that happened because there was so little realism.

My biggest problem was with the characterisation. I couldn’t connect with any of the characters in the book, though I did really like Dylan. They just weren’t developed very much and they all kind of just came off as the same person to me. I felt no emotional connection to the characters and this was probably due to the fact that the novel didn’t really explore any of the characters’ emotions. We got to briefly see Caden’s doubts about what he was doing and the guilt he felt at being responsible for Dylan’s death if he won. But none of this was explored in very much detail, which again made me feel like there was a wall between myself and the novel and its characters. The character that I felt the most frustrated with was probably Juliet. She was described as a genius who had been inventing things from a young age. But that never really came across to me throughout the book. She came off as a regular girl, sometimes whiny, and there didn’t seem to be anything special about her. The only time her inventions and her ability came into play was in a very deus ex machina kind of way towards the end of the book, and by that time, it was too late for me to change my opinion of her.

Overall, there wasn’t very much that I could latch onto. I did like the first 70 pages and maybe the last 30 or so pages but aside from that, I was kind of bored and disappointed with the novel.

10 thoughts on “Review: The Love Interest by Cale Dietrich”