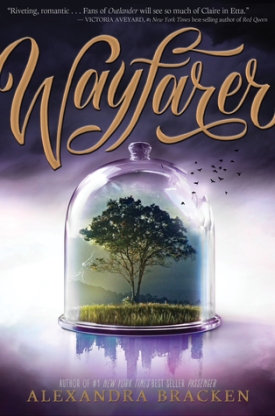 All Etta Spencer wanted was to make her violin debut when she was thrust into a treacherous world where the struggle for power could alter history. After losing the one thing that would have allowed her to protect the Timeline, and the one person worth fighting for, Etta awakens alone in an unknown place and time, exposed to the threat of the two groups who would rather see her dead than succeed. When help arrives, it comes from the last person Etta ever expected—Julian Ironwood, the Grand Master’s heir who has long been presumed dead, and whose dangerous alliance with a man from Etta’s past could put them both at risk.

Meanwhile, Nicholas and Sophia are racing through time in order to locate Etta and the missing astrolabe with Ironwood travelers hot on their trail. They cross paths with a mercenary-for-hire, a cheeky girl named Li Min who quickly develops a flirtation with Sophia. But as the three of them attempt to evade their pursuers, Nicholas soon realizes that one of his companions may have ulterior motives.

As Etta and Nicholas fight to make their way back to one another, from Imperial Russia to the Vatican catacombs, time is rapidly shifting and changing into something unrecognizable… and might just run out on both of them.

Wayfarer is the sequel to Passenger, which means that this review may contain spoilers for the first book. Check out my review for Passenger instead, if you haven’t read it yet.

I really enjoyed Passenger when I read it last year and was really looking forward to Wayfarer. It wasn’t really what I expected but I definitely wasn’t disappointed by it either. I did have some issues with the book but those were probably issues that I had because it had been a whole year since I had read Passenger and it took me a while to get used to the world again.

My main issue with the book was that I found the plot to be confusing. I don’t know if it’s because I’d forgotten a lot about the world and the time travel rules, but I had a hard time following what was going on, especially in the first 50 pages. I reread the ending of Passenger to familiarise myself with what had gone down in the first book and that helped a little bit but I still found it difficult to understand some of the time travel logic and the world at the start of the book. This book talks about many different timelines and I found myself really confused for the first 20% of the novel and couldn’t really follow along. It did get better as I progressed through the book though.

The other problem that I had with the plot was that I had no idea where the book was going for the majority of it. We follow Etta and Nicholas through two separate story arcs and I didn’t quite know what to believe because we were being led to believe two different things. The motives of the side characters and key players of the book were unclear and we were deliberately made to be suspicious of everything, which just added to my confusion as to what was happening. It also didn’t help that there were a lot of different parties with vastly different motives and goals. I couldn’t really keep track of who wanted to do what and I just felt a bit overwhelmed and found it to be too much at times. Ultimately, I just went with the flow and decided not to think about it too much and I ended up really enjoying everything that happened and how the story played out anyway.

We are, all of us, on our own journeys…

I really enjoyed this duology. I’d love to reread the books again because I think it’ll help me understand Wayfarer a little bit better. Despite the confusion and how overwhelmed I felt while reading this book, I highly enjoyed it. It was action-packed and I loved all of the places that the characters time travelled to. It was so much fun and I loved the characters so, so much!