I was actually more restrained this month when it came to buying books. I still acquired a sizeable stack but it was much better than other months when I had absolutely no self-control.

All of these were actually books that I ordered in November but didn’t receive until the first few days of December. I own paperback editions of The Smell of Other People’s Houses and Second Chance Summer but I loved them so much that I wanted the hardcover editions too. The rest are books that I’ve wanted to read for a really long time. 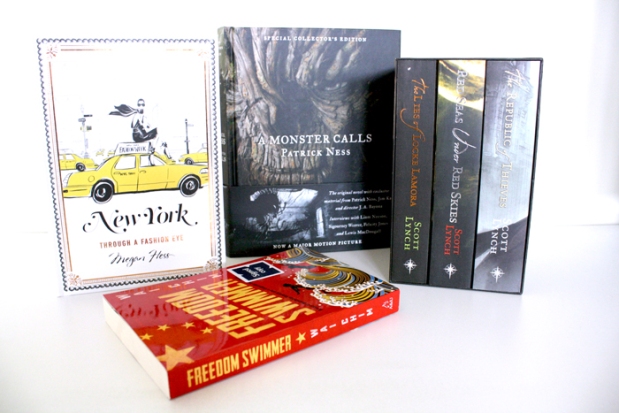 I picked up Freedom Swimmer to read for the #DAReadathon so hopefully I can get to it soon. I couldn’t resist the cover and the rose gold foiling and rose gold painted pages on New York: Through a Fashion Eye so I snapped it up immediately. It was also signed by Megan Hess. On Boxing Day, Kinokuniya had a 20% off sale so I picked up the special hardcover edition of A Monster Calls and also the paperback boxset of The Gentleman Bastard Sequence, which I’ve wanted to read for a while.

I only picked up two books from Dymocks in December and I got them during the same shopping trip. I’d been lusting after the Fantastic Beasts and Where to Find Them screenplay since it first came out. I was in North America at the time and didn’t want to lug it back home so I wanted until I was back to pick it up. I was also in the mood for a festive book so I bought The Twelve Days of Dash and Lily.

I received a bunch of books from Pan Macmillan Australia in December. I’m part of the blog tours for A Quiet Kind of Thunder (January 8) and Freeks (February 5) so keep an eye out for my posts on those. I also requested Windwitch and they kindly sent me a copy. And I received A Girl Called Owl unsolicited. My coblogger Jeann @ Happy Indulgence sent me An Illustrated History of Notable Shadowhunters and Denizens of Downworld as a Christmas gift because she knew I really wanted it and omg the book is stunning!!

What exciting books did you pick up or receive during the holidays?

Leave a Reply to Jenna @ Reading with Jenna Cancel reply