I think I was much more restrained this month than in previous months when it comes to my book haul. Even though I acquired lots of books, I only bought 14 of them! Which is still a lot… but it was my birthday this month and I didn’t buy as much as I thought I did. Book haul justified.

I love how Crooked Kingdom and The Thousandth Floor have the same pretty black and gold colour scheme! It’s soooo pretty. Half of these purchases from Book Depository were preorders. I preordered Crooked Kingdom, The Thousandth Floor and Phantom Limbs. Milk and Honey was a book that I picked up on a bit of a whim but I’ve since read it and absolutely loved it. I purchased P.S. I Like You because I love Kasie West’s fluffy contemporary romances and this one was just as good as her other ones have been. Finally, I picked up The Encyclopedia of Early Earth (which I used to have a copy of but gave it away to a friend who I thought would also love it) and Isabel Greenberg’s new graphic novel, The One Hundred Nights of Hero. I can’t wait to read it! 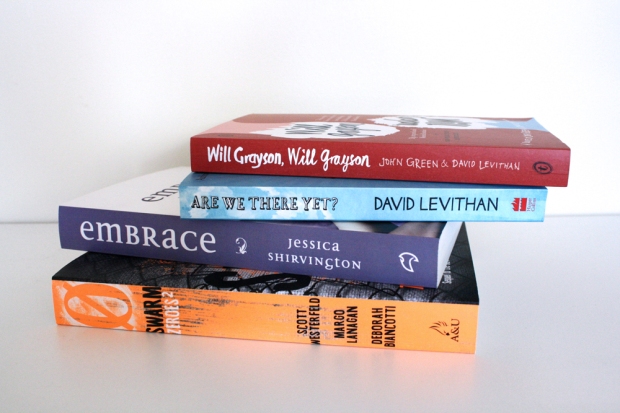 On the first day of September, I went to the #YAFanFest, hosted by Allen & Unwin, to preview some upcoming titles. There were also some amazing Aussie YA authors there and books for sale by Kinokuniya. I ended up picking up a copy of Swarm 4 weeks before release at the event and got it signed by Margo Lanagan and Deborah Biancotti. I also bought a copy of Garth Nix’s Goldenhand before release at the event too, which I gave away to a friend. The following day, I went to a Rainbow Rowell and David Levithan event at Kinokuniya and I picked up two David Levithan books that I don’t already own, Will Grayson, Will Grayson and Are We There Yet? Finally, for my birthday, I bought myself Embrace by Jessica Shirvington because I’ve really enjoyed the three books of hers that I’ve read so far, Disruption duology and Between the Lives.

I’ve been saving up my Dymocks credit points since July so that I can spoil myself on my birthday. However, when I went to the store, there weren’t actually that many books that I wanted to buy. I ended up picking up Graffiti Moon and a finished copy of Words in Deep Blue by Cath Crowley. I also bought Graeme Simsion’s new novel, The Best of Adam Sharp, which was signed. Funny story, after I bought this book from Dymocks, I went to Kinokuniya to browse, and 5 minutes after I left Kinokuniya, I checked my Instagram feed and saw a picture of Graeme Simsion signing copies of The Best of Adam Sharp at Kinokuniya, posted 15 minutes ago. Totally could have gotten my copy personalised if I was paying more attention!

At the #YAFanFest event that I went to, there were goodie bags for all the attendees. In my bag, I received The Diviners and London Belongs to Us. Because I’ve already read and reviewed London Belongs to Us, I ended up swapping with Emily @ The Loony Literate for Cooper Bartholomew is Dead. At the event, I also won an ARC of Garth Nix’s Frogkisser! in a lucky dip that he was running. It sounds hilarious and I’m so excited to read it. From publishers, I received Swarm from Allen & Unwin, Replica from Hachette Australia, Witch’s Pyre from Pan Macmillan Australia, and Empire of Storms from Bloomsbury Australia. Empire of Storms actually came last month but I didn’t include it in my book haul last month. My coblogger Jeann @ Happy Indulgence sent me Open Road Summer for my birthday and I’m so happy to now have it in my hands!!

Phew! All done! Which books did you purchase in September and what are you most excited to read?