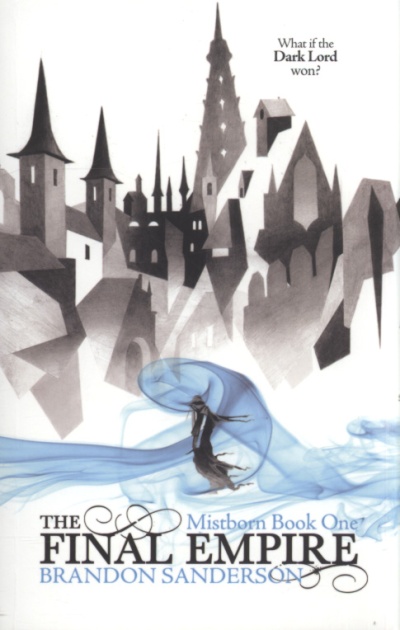 In a world where ash falls from the sky, and mist dominates the night, an evil cloaks the land and stifles all life. The future of the empire rests on the shoulders of a troublemaker and his young apprentice. Together, can they fill the world with colour once more?

In Brandon Sanderson’s intriguing tale of love, loss, despair and hope, a new kind of magic enters the stage— Allomancy, a magic of the metals.

After much coercion from every single person on this planet, I finally read The Final Empire, the first book in the Mistborn series. I had high expectations going into the series and, despite the novel going in a much different direction to what I had anticipated, I wasn’t disappointed at all by it.

The Final Empire has a very interesting world and a unique magic system. Being the first book in a series, much of this novel is actually spent on the world building and setting up the magic system, Allomancy. Allomancy was really intriguing and unlike any other magic system I’ve encountered before. The magic wielders ingest different types of metals and by ‘burning’ them, they’re able to acquire certain powers from these metals. However, once the store of metals inside your body has been used up, Allomancers are not unlike normal, non-magic wielding people. As much as I love the world and magic system, it took me a while to get into it, and it wasn’t until I’d reached maybe the 150 page mark that I was really immersed in the world. However, what I really did like was that we were introduced to the magic system by Kelsier, a charismatic and trouble-making Mistborn who is able to use all metals he ingests, teaching his apprentice Vin to use her Allomantic skills that she didn’t know she had. It gave the reader a very comprehensive look into Allomancy and what Allomancers and Mistborns can do.

“You ask why I smile, Goodman Mennis? Well, the Lord Ruler thinks he has claimed laughter and joy for himself. I’m disinclined to let him do so. This is one battle that doesn’t take very much effort to fight.”

As for the plot, I loved the concept of it. I’ve had this novel pitched to me as a heist story and I don’t really agree. For me, this is definitely a story about rebellion from the lower classes who are oppressed by the nobility, and mostly by the Lord Ruler, who is immortal and rules over the entire world. Sure, the operation is run by a bunch of thieves from the underground, but I’m not sure that that makes it a heist story. I was a little bit surprised by how little action there was in the book. I was expecting it to be super action-packed and fast-paced but it’s quite a slow-paced read that was a little bit draggy at times. I did listen to a small part of the novel via audiobook though, and that probably made it even more draggy. I just felt like there were big chunks of the book that was filled with intrigue and planning but not a lot of action. I also had a problem with some of the action scenes being a bit too descriptive, especially at the beginning of the novel. Almost every move that a character made during an action scene was written out and it was a bit hard to follow (ironically). But overall, I did really like the story. I just wanted a bit more out of it.

The characters in the book were wonderful though. My favourite had to be Kelsier. How could I not love this crazy, crazy man? He was very impulsive and quirky and I loved that about him so much. He had so many brilliant ideas and was a great leader to the crew. He was also a great mentor to Vin and omg I loved him. I’m a bit annoyed about the direction that the story took him and I’ll probably be annoyed for a long time to come. Another character who I absolutely loved was Elend. He reads books at parties so it was pretty much guaranteed that I’d love him. His character was a bit flat though so I’m keen to see how he develops further. Now, on to Vin, who’s arguably the main character in the book… it took me a long time to warm to Vin. She started off as a very cautious and mistrusting person who was a bit self-deprecating and shy. But I felt like she was also simultaneously really stubborn and had an inflated sense of self-importance that really annoyed me. Thankfully, I grew to like her a little bit more as the book progressed but it took probably 400 pages for me to start liking her. Luckily there were a whole cast of side characters who I could enjoy while I struggled to overcome my issues with Vin. I really liked most of the side characters and thought they were all extremely interesting. The characters all felt relatable and I enjoyed following their journey very much.

The Final Empire wasn’t what I thought it was going to be but I highly enjoyed it anyway. The pacing of the book is a bit slow and I’m not sure when I’ll be able to motivate myself to pick up the next books. I am definitely intrigued by where the story is going to go next and will be reading them at some point.

19 thoughts on “Review: The Final Empire by Brandon Sanderson”