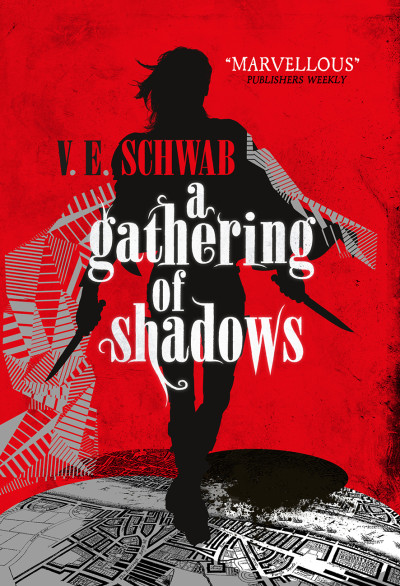 Four months have passed since the shadow stone fell into Kell’s possession. Four months since his path crossed with Delilah Bard. Four months since Rhy was wounded and the Dane twins fell, and the stone was cast with Holland’s dying body through the rift, and into Black London.

In many ways, things have almost returned to normal, though Rhy is more sober, and Kell is now plagued by his guilt. Restless, and having given up smuggling, Kell is visited by dreams of ominous magical events, waking only to think of Lila, who disappeared from the docks like she always meant to do. As Red London finalizes preparations for the Element Games—an extravagant international competition of magic, meant to entertain and keep healthy the ties between neighboring countries—a certain pirate ship draws closer, carrying old friends back into port.

But while Red London is caught up in the pageantry and thrills of the Games, another London is coming back to life, and those who were thought to be forever gone have returned. After all, a shadow that was gone in the night reappears in the morning, and so it seems Black London has risen again—meaning that another London must fall.

This is the second book in Shades of Magic trilogy, which means that this review contains spoilers for the first book. Proceed with caution. I also received a sampler of A Gathering of Shadows from NetGalley.

A Gathering of Shadows is the sequel to A Darker Shade of Magic, and being a chronic non-blurb-reader, I was kind of surprised by the direction that this sequel took. I thought that I had an idea of where the series was going to go after the first book and, while I do feel that this was a good continuation from ADSOM, it felt like this book was taking a bit of a detour. It felt very much like a filler book and I’m not sure that it added all that much to the trilogy. Having said that, I did really like what I read and enjoyed the plot of the story very much.

A Gathering of Shadows is very much about the aftermath of A Darker Shade of Magic and how Kell and Lila are living their separate lives. It’s also about their reunion and about a competition between magicians. Meanwhile, in the background, something dark and sinister is happening, which could cause the collapse of Red London. I loved the pacing of this book. It was extremely slow-paced but I thought that the pacing really suited the atmosphere of the book and what the plot was trying to achieve. There wasn’t really much happening in the first 300 pages of the book but I enjoyed slowly seeing how Kell and Lila are coping with what happened during A Darker Shade of Magic. There was a lot of character development built into this book and I thought it was done very successfully.

I enjoyed every single character in this book. They all served a purpose and I thought that they were all extremely complex and well-developed characters. They were multifaceted and I really enjoyed not knowing exactly what to expect from them. One of my favourite characters of this book was Alucard Emery. His character just gave me so much joy because he reminded me of beloved characters from other books. I also loved the old characters who we’d met in the first book. Kell was a magnificent character as always and I enjoyed Lila as well. I still haven’t managed to warm fully to Lila and I’m still having a hard time seeing why people love her so much but she’s definitely growing on me.

Overall, this was a great sequel, even though it felt a bit like a filler book in the story arc. I can’t wait to revisit these characters in A Conjuring of Light!

14 thoughts on “Review: A Gathering of Shadows by V.E. Schwab”