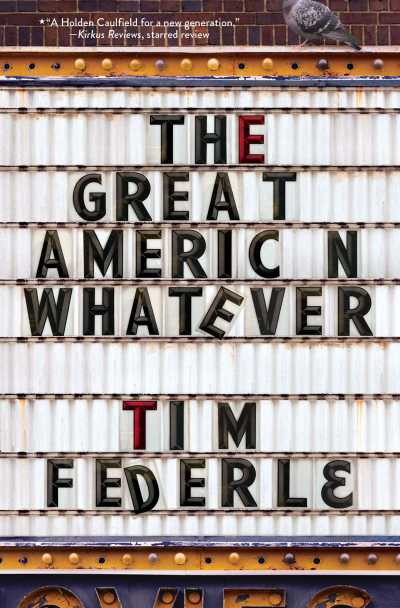 Quinn Roberts is a sixteen-year-old smart aleck and Hollywood hopeful whose only worry “used “to be writing convincing dialogue for the movies he made with his sister Annabeth. Of course, that was all before before Quinn stopped going to school, before his mom started sleeping on the sofa and before Annabeth was killed in a car accident.

Enter Geoff, Quinn s best friend who insists it s time that Quinn came out at least from hibernation. One haircut later, Geoff drags Quinn to his first college party, where instead of nursing his pain, he meets a guy a hot one and falls hard. What follows is an upside-down week in which Quinn begins imagining his future as a screenplay that might actually have a happily-ever-after ending if, that is, he can finally step back into the starring role of his own life story.

On paper, The Great American Whatever is exactly my kind of book. Grief, LGBTQIA+ elements and a coming of age story is exactly what I like in a contemporary novel. And while I did enjoy it, I didn’t really connect with it as much as I thought I would.

This novel is about Quinn, who’s been struggling for the last six month since the death of his sister and the abandonment by his father. When his best friend tries to pull him out of his funk, he finds romance and discovers things about himself and his sister that he never knew before. As a coming of age story, it was enjoyable and contained lots of great character growth. The development of Quinn’s character throughout the novel was nicely paced and done quite seamlessly. However, I have to say that I felt a little bit bored at times. I thoroughly enjoyed the first 75 pages and the last 100 or so pages but the middle section felt like a bit of a drag. There wasn’t really much happening and I just didn’t really connect with the book for quite a bit of the middle section.

This was probably in part due to the romance. I wasn’t a huge fan of it but didn’t hate it either. It was just a little bit average and I suppose that was exactly the point of it… so maybe this isn’t really a criticism but more of a pat on the back for Tim Federle? I just didn’t really feel anything from the romance and I think that was what made the book seem a bit boring and draggy for me in the middle. Having said that, I did like the role that the romance played in the book and appreciated how it played out.

Even though I didn’t connect with the romance, I did really like Quinn as a main character. I connected with his sense of humour and loved his snarky tone. His voice and his personality were fantastic and I just really enjoyed how realistic he came across as a character. He just seemed like a really normal boy (who’s obviously been through some rough times) and I could see him being someone from my everyday life. His reactions were genuine and I never felt like he was just a fictional character.

Overall, I did enjoy The Great American Whatever. I had a little bit of trouble connecting with the story, especially in the middle section of the book, but I thought the beginning and end were really strong. It’s a quick read and I thought it was a successful YA debut for Tim Federle.

11 thoughts on “Review: The Great American Whatever by Tim Federle”