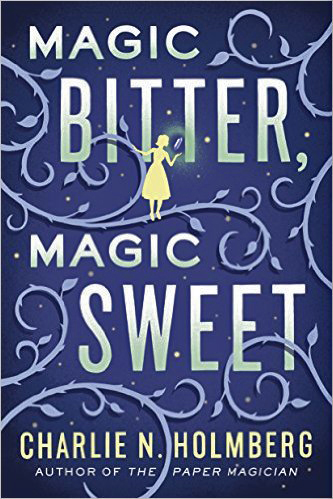 Maire is a baker with an extraordinary gift: she can infuse her treats with emotions and abilities, which are then passed on to those who eat them. She doesn’t know why she can do this and remembers nothing of who she is or where she came from.

When marauders raid her town, Maire is captured and sold to the eccentric Allemas, who enslaves her and demands that she produce sinister confections, including a witch’s gingerbread cottage, a living cookie boy, and size-altering cakes.

During her captivity, Maire is visited by Fyel, a ghostly being who is reluctant to reveal his connection to her. The more often they meet, the more her memories return, and she begins to piece together who and what she really is—as well as past mistakes that yield cosmic consequences.

From the author of The Paper Magician series comes a haunting and otherworldly tale of folly and consequence, forgiveness and redemption.

I received a copy of this book from the publisher via NetGalley. All thoughts and opinions are my own.

Where do I even begin with this review? I can’t really find the words to describe what this book was about. It was just so strange and bizarre and I liked it while not liking it at the same time. There’s magic, baking and Hansel and Gretel elements, which made it a very interesting and unique read but there were also many things that I really did not enjoy. This is technically an adult fantasy novel but it reads like young adult and would appeal to a lot of younger readers.

This book is about Maire, a talented baker who is able to infuse certain qualities into her baked goods by imagining events that inspire those emotions/qualities as she’s baking them. However, she wasn’t always a baker. In fact, Maire has no recollection of who she was before she woke up in her small town four years ago. When her town is invaded and she’s taken as a slave and used for her magical baking abilities, she starts to get closer to remembering who or what she was. On top of being worked to death by her mysterious master, Maire keeps running into a ghost/otherworldly being who seems to know who she is but isn’t very forthcoming with his knowledge.

My struggle with this book was that there was a little bit too much going on. For 75% of the book, I had no idea what the story was about or where the book was going. It had a really great beginning that hooked me with the unique ‘magical baking’ (as Cait from Paper Fury originally called it) and I felt a little bit cheated when I realised, after pushing and pushing through the book, that it wasn’t going to be about Maire’s magical abilities (well not really). Her magical abilities weren’t really explored or developed and I didn’t get a good sense of how it worked or why she had those abilities. These questions were cleared up to some extent at the end of the novel but it ultimately felt very unsatisfying because I expected a lot more from this magical baking concept. All that really happened was that Maire made a whole heap of cakes that were apparently different from each other but seemed completely the same to me. It just felt kind of flat. I also didn’t get a good sense of the world and felt that the world building was sorely lacking. There were some settings that were magical and some that weren’t and I had a hard time putting it all together and imagining what the world looked like.

I also really struggled with the pace of the book and the plot. There really isn’t a lot that happens in Magic Bitter, Magic Sweet. There’s action in the first 30% of the book but then it drags and drags until the 75% mark when the explanations start coming. The only reason why I pushed through and didn’t give up on the story was because I really wanted to know what was happening and my questions really weren’t answered until the last part of the book. It was just a really confusing reading experience that had me a bit bored for most of the middle section. The writing was simplistic and easy to read but it wasn’t a writing style that I connected with, so overall the reading experience wasn’t that great…

It also didn’t really help that the characters lost their initial appeal throughout the book. There was very little character development and I wasn’t a big fan of the characterisation. I didn’t get a good sense of who any of the characters were and I felt that the characterisation wasn’t always consistent. Maire’s captor and master is violent and aggressive until he’s not. He’s then passive and meek until he’s violent and volatile again. I just had no idea who he was as a character and it bothered me a lot. I also didn’t really know who Maire was and I felt like there were times when she did things that were a little bit out of character. She’s portrayed as a caring and loving, innocent young woman who loves to bake but when she was first captured she wanted to “scale the side [of a two storey building] and reach the roof” to escape. She’s not really a Celaena Sardothien, is she? And then we have Fyel, the ghostly visitor, who’s the typical useless ghost who knows everything but isn’t able to help and gives mixed messages throughout the novel. It was just incredibly frustrating and I couldn’t connect with any of the characters at all.

I do have to applaud the author on coming up with a really unique concept but I thought the execution was kind of subpar. The plot just wasn’t very engaging and I didn’t think the world building or the characters were very strong. I did like the concept of magical baking and I loved that there were elements of Hansel and Gretel incorporated into the story. There were also parts that reminded me of The Gingerbread Man, which I thought was pretty cool. All in all, it was a little bit of an average read but I recommend checking it out if you’re intrigued by the idea of magical baking or just want to read a book with lots of baked goodies in it.