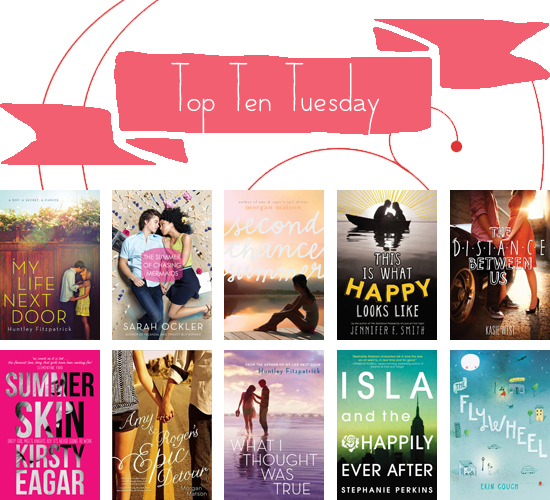 Welcome back to another Top Ten Tuesday on my blog. I feel like it’s been a while but it’s only really been two weeks… Top Ten Tuesday is a weekly feature hosted by The Broke and the Bookish. This week’s theme is beach reads.

So… I don’t really go to the beach even though Sydney has some of the most beautiful beaches. But I’ve tried to choose ten books that are either set on the beach, set in summer or just a light and quick read that you could probably read in one sitting. And I’ve tried to choose books by a variety of authors so that I’m not putting down every single Huntley Fitzpatrick book, every Morgan Matson book and every Kasie West book (though you should read them all!).

1. My Life Next Door by Huntley Fitzpatrick

This amazing book is set in a coastal town and has a very summery feel. It’s also one of my favourite contemporaries and I’ll never stop recommend this book. It’s cute and summery but also packs a punch with its themes.

2. The Summer of Chasing Mermaids by Sarah Ockler

Another book that is cute and summery but packs a punch, The Summer of Chasing Mermaids is a loose retelling of The Little Mermaid. As with all of Sarah Ockler’s other books, it goes beyond being a contemporary romance and delves into some serious issues. The message of this book really carries through and if you’re still not convinced, there are mermaids 😀

All of Morgan Matson’s books are perfect for summer and the beach, but Second Chance Summer is my favourite. I wouldn’t necessarily recommend bringing this one to the beach or reading it in public since it’ll probably make you ugly-cry at some point. But it’s set at the beach and the characters are so relatable!

4. This is What Happy Looks Like by Jennifer E. Smith

I love Jennifer E. Smith’s books and I wanted to feature one in this list of cute and summery contemporaries. This one is also set in a coastal town and features a cute relationship with a small town girl and her penfriend, who turns out to be a Hollywood actor.

5. The Distance Between Us by Kasie West

When it comes to quick and easy summer contemporary reads, Kasie West doesn’t disappoint. This is probably my favourite of her books that I’ve read. It’s got a really cute romance that kept me hooked. I finished the book in one sitting.

This is a really recent read. It’s not really set in the summer but it’s a very quick and easy contemporary read by an Aussie author, and it feels super summery. This book is more NA than it is YA so if you a new NA book to read that isn’t completely full of sex scenes, try this one!

I thought I’d throw in a road trip book since road trips always remind me of summer. This is probably my favourite road trip book, though I do really like The Geography of You and Me by Jennifer E. Smith too. Amy and Roger’s Epic Detour is also super quick to read. I think I read this in just one or two sittings.

8. What I Thought Was True by Huntley Fitzpatrick

Another Huntley Fitzpatrick book that I love love LOVE! I’ve loved every single book that she’s ever written and this one was definitely no exception. It’s also set in a coastal town and feels very beachy. I absolutely loved the story and the characters in the book. Cass, the male love interest is just a super nice guy. Huntley Fitzpatrick is just so good at writing genuine and GOOD guys.

9. Isla and the Happily Ever After by Stephanie Perkins

Okay, this book isn’t really summery or beachy. There’s actually a lot of snow in this one… But I felt like I had to include a Stephanie Perkins book when talking about light contemporaries. This is my favourite of Stephanie Perkins’ books. Though I suppose she has a new anthology of short stories out that are summer-themed?

10. The Flywheel by Erin Gough

This is another book that isn’t really set in the summer but has a light, summery feel to it. It’s a really great LGBTQ+ book that’s set in Sydney with some really relatable characters.