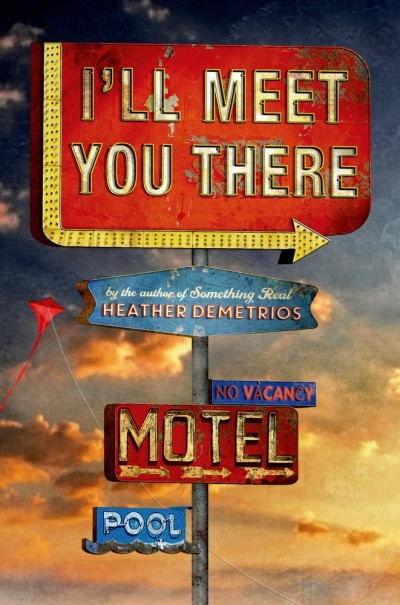 If Skylar Evans were a typical Creek View girl, her future would involve a double-wide trailer, a baby on her hip, and the graveyard shift at Taco Bell. But after graduation, the only thing separating Skylar from art school is three months of summer…until Skylar’s mother loses her job, and Skylar realizes her dreams may be slipping out of reach.

Josh had a different escape route: the Marines. But after losing his leg in Afghanistan, he returns home, a shell of the cocksure boy he used to be.

What brings Skylar and Josh together is working at the Paradise—a quirky motel off California’s Highway 99. Despite their differences, their shared isolation turns into an unexpected friendship and, soon, something deeper.

Compelling and ultimately hopeful, this is a powerful examination of love, loss, and resilience.

I honestly have no idea why I waited so long to read this book because it was absolutely amazing and is now one of my favourite contemporary YA novels ever. It had a good balance of romance, family and friendship elements, which is a formula for success when it comes to contemporaries for me.

This book is set in a very small town in California. Skylar lives in a trailer with her mother who is an alcoholic and won’t stop drinking, even though her husband died in a car accident while drunk driving. Skylar has just graduated high school and cannot wait for the summer to end, when she can finally go to art school in San Francisco and escape her suffocating small town. But when her mother is fired from the only job she’s ever had, things go downhill and suddenly Skylar’s future is no longer clear. Enter Josh, a previous colleague of Skylar’s at her job at the Paradise motel. He’s back from fighting in Afghanistan, with one less leg than he had when he left…

It was like the whole town was swimming in failure, but no one realized they were drowning.

I was very impressed with how many themes and elements Heather Demetrios managed to explore in this book. And none of these themes were glossed over. Each and every one of them were given enough page-time to be thoroughly explored and I really appreciated how well it was done. I’ll Meet You There explores some very common YA contemporary themes, like alcoholism and small-town-suffocation (I totally made that up, but it’s now a thing), in a completely novel and different way. I never got the sense that I was reading something that I’ve read a million times before. It felt very unique and special and I enjoyed every single page of the story. The novel also explores PTSD, which is something that we’re seeing increasingly often but I have to say that this was one of the best PTSD stories that I’ve ever read. It felt incredibly realistic and even though I don’t know what it’s like to be have PTSD or be in a situation where everyday things could trigger panic attacks or high anxiety, I felt like I knew Josh and I knew how his experiences in Afghanistan have affected him.

I absolutely loved the characters in this book. Skylar was a wonderful protagonist and I couldn’t believe how strong and resilient she was, in the face of everything she was going through. She’s pretty much taking care of her mother, who is on the path to self-destruction. They’re both relying on Skylar’s income from working at the motel and Skylar just wants to make sure that her mother has a job and is able to take care of herself before she moves to San Francisco. Skylar definitely surprised me with how resilient she was. If I had to go through everything she went through in this book, I would’ve broken down much, much earlier. Her mother behaved in ways that I couldn’t imagine any mother behaving and she just didn’t seem to have her daughter’s best interests at heart. The family arc in this book was incredibly hard to read and honestly pretty upsetting at times. I was really proud that Skylar decided to take some time just for herself and put some distance between herself and her mother’s problems. I really admired her maturity when it came to making decisions.

Josh was a character that I also loved. There were short chapters that were written from his point of view and I thought they were really interesting. They allowed me to get to know Josh a little bit more and I loved that we got to see into his head and get a sense of how his experience in Afghanistan had affected and changed him, physically and mentally. I also thought it was interesting that Skylar and Josh knew each other previously and that Josh used to be a bit of a jerk and had a reputation of being a player. It really added a different dimension to his character and transformed him into a really complex character.

The romance was probably my favourite aspect of the book. There was so much to love about this book but I thought the relationship between Skylar and Josh was just so realistic and moving. They become attracted to each other quite early in the book but the romance itself was a bit of a slow burn. It developed at a very natural pace and nothing felt rushed or dragged out. Everything just happened in a really realistic way and it was impossible not to feel connected to Skylar and Josh as they figured out their feelings for each other. I loved how much they relied on each other and supported each other throughout the book. Josh helped Skylar through her issues with her mother and was just there to listen when she needed to talk. And in return, Skylar helped Josh come to terms with his traumatic experience in Afghanistan. She never let him use the war and his experiences as an excuse, which was exactly what Josh needed.

And of course, there were a lot of great friendship elements. Skylar and Josh’s relationship wasn’t just a romantic one. Their relationship was first and foremost a friendship that turned into something more. But this book also explored Skylar’s friendships with her best friends, Chris and Dylan. They were always there for her when she needed a friend and needed advice. I loved their role in the book and I thought their friendships were so heartwarming.

I wanted to have the perfect words to tell him how he’d been family, how I wouldn’t be who I was without him and how my life was a collage of memories and he was in every one.

And finally, I absolutely loved the writing in this book. It was very impactful and I could quote from this book for days and days. Heather Demetrios just writes the most wonderful stories and I’ve enjoyed both her contemporary and fantasy stories because of the beautiful writing and storytelling.

25 thoughts on “Review: I’ll Meet You There by Heather Demetrios”