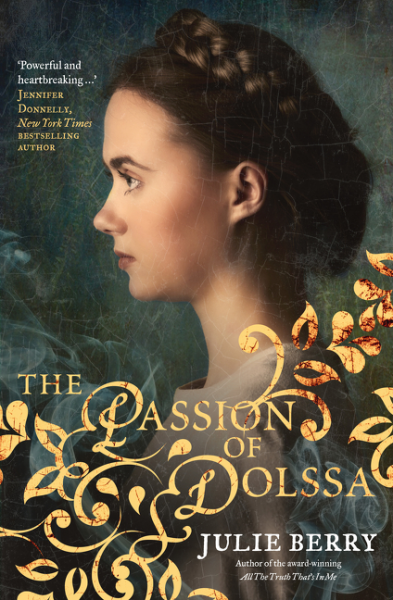 Dolssa is a young gentlewoman with uncanny gifts, on the run from an obsessed friar determined to burn her as a heretic for the passion she refuses to tame.

Botille is a wily and charismatic peasant, a matchmaker running a tavern with her two sisters in a tiny seaside town.

The year is 1241; the place, Provensa, which we now call Provence, is a land still reeling from the bloody crusades waged there by the Catholic Church and its northern French armies.

When the matchmaker finds the mystic near death by a riverside, Botille takes Dolssa in and discovers the girl’s extraordinary healing power. But as the vengeful Friar Lucien hunts down his heretic, the two girls find themselves putting an entire village at the mercy of murderers.

Thank you to HarperCollins Australia for providing a review copy of the book. All thoughts and opinions are my own.

I didn’t know much about this book going into it, even though I’ve been highly anticipating it since I heard about it at the HarperCollins BTCYA event in November last year. And I definitely was not disappointed. I did have a really hard time with the first 50 pages of the book. The writing was very hard to get into and I wanted to DNF the book so many times. But I pushed through and it just kept getting better and better.

Despite the title of the book, The Passion of Dolssa is not really about Dolssa. It’s definitely a book about Botille and how her life is impacted by the presence of and her friendship with Dolssa. Botille is a girl who lives a pretty ordinary life in a small seaside town. But one day, she finds a malnourished Dolssa who is on the run for being a heretic and her life changes dramatically. Now, her life revolves around Dolssa and keeping her a secret from the village and from those who seek her, and that’s definitely easier said than done…

I absolutely loved Botille in this book and wasn’t too sad that there wasn’t more of Dolssa. Botille was strong, passionate and stood up for the things that she believed in, no matter the consequences. She was a fantastic character who was easy to love and empathise with and I was just so invested in her story. And this was the case with many of the other characters too. Initially, I had lots of doubts about the book but as I read more and more of it, I realised how connected to all of the characters I felt and I wasn’t able to put down the book because I needed to know what was going to happen to them next. The Passion of Dolssa is definitely a very character-driven story and I thought all of the characters were amazingly developed and written. I enjoyed all of the relationships between the characters and how they looked out for and supported each other. I also really enjoyed the little bits of romance that we got in the book and they were definitely some of my favourite moments in the book.

This book focuses on religion, which is something that I almost never read about. I’m not a religious person and I don’t read very many books about religion because I find it difficult to connect with and comprehend the ideas. But I felt like this book had just the right amount of religion and was done in a way that wasn’t preachy and was easy for me to understand and connect with. And because it’s based on real events in history, it made it even more interesting and relevant to me. I really enjoyed that the book showed the positives and negatives to religion – how religion can save people but also how those who are religious can abuse their power and use it to oppress others. It was an eye-opening read, especially because it’s not something that I’ve ever thought about in much detail.

What I had a little bit of a problem with was the writing, especially at the beginning of the book. It took me a good 50 pages to really get into it, and it’s definitely a style that you need to get used to. There are a lot of different perspectives and the chapters are quite short, so I felt like I was being pulled all over the place at the beginning. However, once I started getting into the story and the plot, this became less of an issue. The writing also switches constantly between first and third person narration, which was very confusing at first because it seemed like there was no pattern to it, but I quickly realised that Botille and Dolssa’s chapters were written in first person, while the other perspectives were in third person narration. The writing style and format of the book just takes a little bit of getting used to, so I’d recommend just pushing through if you’re thinking of DNFing the book.

The Passion of Dolssa was quite heavy and sad but I think it’s definitely worth the read. It’s a very interesting glimpse at a part of history that isn’t explored very much (or at least I haven’t read very much about it). It’s impossible not to fall in love with the characters in this book and become invested in their story.

11 thoughts on “Review: The Passion of Dolssa by Julie Berry”