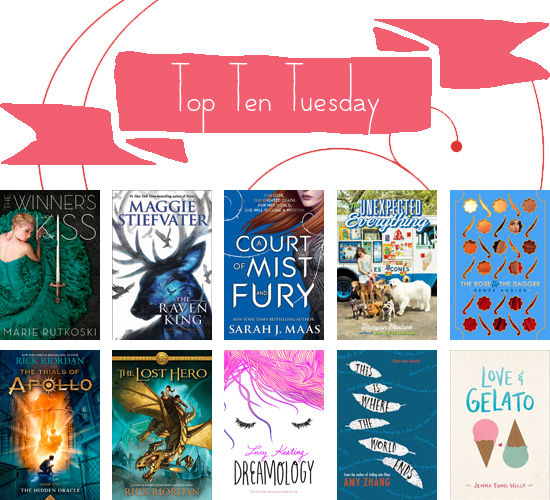 You’ll probably have noticed that I don’t do TBR posts because what I read really depends on my mood. But the topic for this week’s Top Ten Tuesday, which is hosted by The Broke and the Bookish, is books that are on my Spring TBR (which I’ve changed to Autumn TBR because southern hemisphere), so I thought I’d list a couple of books that I plan to read in the next two months. Most of these books I’ve either preordered, requested or already own copies of, but I’m super excited to get to all of these.

The Goodreads page for each book is linked!

1. The Winner’s Kiss by Marie Rutkoski

I absolutely loved both The Winner’s Curse and The Winner’s Crime and I have to get my hands on this as soon as it’s released! Like, you don’t understand how much I need to know what happens next. I’m about to implode from the need.

2. The Raven King by Maggie Stiefvater

This is another series finale that I’m super excited for. The Raven Cycle so far has been magnificent and I can’t wait to see what happens next.

3. A Court of Mist and Fury by Sarah J. Maas

I’m pretty sure ACOMAF is on everybody’s TBR and wishlists. I thought A Court of Thorns and Roses was really great and I’m so excited that ACOMAF is inspired by the Hades and Persephone story. I’m slightly iffy about it though because Rhysand is going to get a lot more page time and I don’t know how I feel about him.

4. The Unexpected Everything by Morgan Matson

I absolutely love Morgan Matson and everything she’s written. I’ve already heard really good things about The Unexpected Everything and I can’t wait to have it in my hands. It’s going to be fantastic!

5. The Rose and the Dagger by Renee Ahdieh

The Wrath and the Dawn was another 2015 release that I really enjoyed and I have really high hopes for this sequel.

6. The Hidden Oracle by Rick Riordan

Out of all of Rick Riordan’s books, I’ve only read Percy Jackson and the Olympians but I want to eventually catch up and binge read everything else. Apollo is probably my favourite of the major gods and I’m so excited to read about him as a mortal.

7. The Heroes of Olympus series by Rick Riordan

I’ve had the first four books of the Heroes of Olympus on my shelves for a few months now but I still haven’t read them because I want to marathon the whole series. I have the US paperbacks of the books and the last book, The Blood of Olympus, doesn’t come out in paperback until early April. So I’m holding off until I have all of the books in my possession. I’ve already preordered The Blood of Olympus, so hopefully it gets here soon.

I’ve had an eARC of Dreamology sitting in my Kindle app since last year. I was planning to review it for Happy Indulgence but the awesome Aila read and wrote up a review for it in like a day. So it’s kind of continued sitting in my Kindle app… It sounds fascinating and Aila really enjoyed it, so I’m really keen to see what I think of it.

9. This is Where the World Ends by Amy Zhang

This is one of my most anticipated contemporary releases of this year and I have an ARC of this one! I cannot wait to read this and will have a review up closer to release date, which is in April.

This sounds like a really cute contemporary and there’s been quite a bit of buzz about it around the community. But let’s be real, I’m excited about it because the author and I share the same name.

What books are you really keen to read in the next few months?!