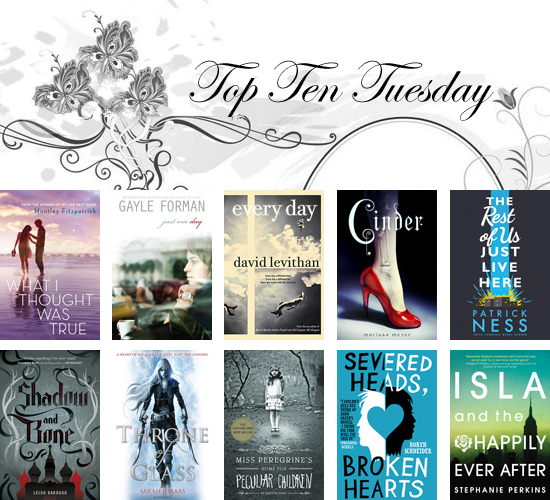 This week’s Top Ten Tuesday (created by The Broke and the Bookish) theme is favourite new-to-me authors that I read for the first time this year. This was a hard list for me to make because I’ve read so many books this year but I’ve chosen authors that I’ve read more than one book from. I don’t think I’d be able to call somebody a favourite author if I’ve only read one book of theirs.

As always, these are in no particular order. The book covers that I’ve featured above are the first books by these authors that I read, meaning that you should pick them up because they left me wanting more!

I’m sure you’ve all seen the beautiful spines of Huntley Fitzpatrick’s books in the bookstore. What I Thought Was True was definitely a cover/spine-buy for me but it ended up blowing my mind and I absolutely had to buy My Life Next Door and The Boy Most Likely To as well. I’ve given these books at least a 4.5 star rating. Pick them up!

When I discovered Every Day, I felt like I had achieved some sort of reading milestone or unlocked some hidden treasure. For me, David Levithan is the king of LGBTQ+ fiction. I bought Two Boys Kissing when I was halfway through Every Day and started it straight afterwards. I’ve also read Lover’s Dictionary, and nothing by David Levithan has disappointed me yet.

The Lunar Chronicles is undoubtedly my favourite series (though it has some fierce competition from Cassandra Clare’s The Infernal Devices). Winter is one of my top 5 favourite books this year and I will happily devour any other book by Marissa Meyer.

I have Joey @ Thoughts and Afterthoughts to thank for this one (he’s probably going to gloat now). The Rest of Us Just Live Here was my first Patrick Ness novel and I started with that one because it was a standalone (and a new release). I enjoyed it but it wasn’t as mindblowing as I thought it would be. But I’m glad that I gave him another chance because A Monster Calls and Chaos Walking were brilliant. Joey, stop gloating.

I have to admit that I wasn’t super impressed with Shadow and Bone, which was my first book by Leigh Bardugo. But I already owned the other two books in the Grisha trilogy so I persisted and it paid off because each book got better. And Six of Crows… DAYUM, that book! It was amazing.

Throne of Glass was another first book that I wasn’t blown away by. It was just okay. But I read The Assassin’s Blade straight after and it totally redeemed the whole series for me. It also helped that I buddy read all the books that were out at that time. I thought A Court of Thorns and Roses was amazing as well and Sarah J. Maas has definitely become one of my favourites.

Miss Peregrine’s Home For Peculiar Children was a book that I wasn’t expecting to like. I was worried that it was going to be too creepy for me to handle but I ended up loving it. I thought the whole trilogy was amazing and I can’t wait to read something new from Ransom Riggs.

I’ve only read two books by Robyn Schneider (she only has two) but I gave both of them 5 stars. I read Severed Heads, Broken Hearts (aka, The Beginning of Everything) at the very beginning of this year and it gave me all the feels. It was simple but heartbreaking and emotional. Extraordinary Means was more of the same thing and I am in love with Robyn Schneider.

I bought all of Stephanie Perkins’ books in January and read them all in a week. I started out of order and picked up Isla and the Happily Ever After first because blue/green is my favourite colour (yes, that’s how I work). It remains my favourite of the three companion novels but I’ve enjoyed all three of them. I also really liked her short story collection, My True Love Gave to Me. and I’m highly anticipating her summer-themed short story collection!

Who are your favourite new-to-you authors?

42 thoughts on “Top Ten Tuesday: Ten Favourite New-To-Me Authors I Read for the First Time in 2015”