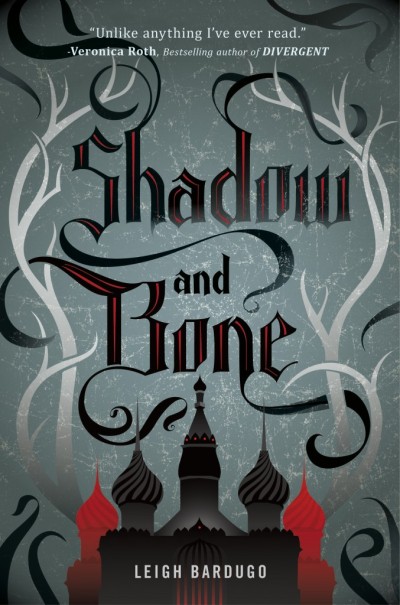 Surrounded by enemies, the once-great nation of Ravka has been torn in two by the Shadow Fold, a swath of near impenetrable darkness crawling with monsters who feast on human flesh. Now its fate may rest on the shoulders of one lonely refugee.

Alina Starkov has never been good at anything. But when her regiment is attacked on the Fold and her best friend is brutally injured, Alina reveals a dormant power that saves his life—a power that could be the key to setting her war-ravaged country free. Wrenched from everything she knows, Alina is whisked away to the royal court to be trained as a member of the Grisha, the magical elite led by the mysterious Darkling.

Yet nothing in this lavish world is what it seems. With darkness looming and an entire kingdom depending on her untamed power, Alina will have to confront the secrets of the Grisha . . . and the secrets of her heart.

Shadow and Bone is the first book in the Grisha trilogy and it was a respectable beginning to the trilogy. It has a fascinating world and some interesting characters but I thought that the book needed a bit more development overall.

Let’s start with the world. I really loved the Russian-inspired setting of the Grisha world but I felt that we were just thrown into the world from the beginning, with very little explanation. There were lots of foreign terms being thrown at me and I had no idea what they meant. The book does contain a very nice looking map, but doesn’t include a glossary (at least my US hardcover edition doesn’t) to help me understand what all the terms meant. There were also a lot of terms in the book, so even when a small explanation or description was given, I had a bit of a hard time keeping track of what everything was until about halfway through the book.

Having said that, I didn’t find it difficult to picture the world. There was enough description for me to form a vivid image of the setting and the different places that the book travelled to. I could easily imagine the darkness and despair of the Fold and the glamour and luxury of the palace. I also really enjoyed the distinct classes of the Grisha and thought that it was an interesting concept, but I do wish that we had learnt more about how their powers manifest or how they choose which kind of Grisha to be.

I enjoyed the characters in the book but I thought that the main characters were not as interesting as the side characters. Alina, as a main character, was boring and I felt very indifferent about her. She’s the classic YA special snowflake who has the power to save the world from destruction, and feels all of society’s pressures upon her shoulders. But for me, she’s a special snowflake who isn’t very special at all. My problem with Alina is that she was kind of stagnant in her character development. She never really learns to use or develop her power, and she pretty much lets everybody else in the book influence her behaviour or make decisions for her. I just wanted her to own her role and not just wander about in self-doubt and indecision.

I liked her leading men a little bit more. I thought that the Darkling was a really interesting character and I loved the concept of him being a living amplifier of Grisha powers. He was dark, enigmatic and powerful, and I think I was drawn to him because he was so mysterious. But I also felt that his character was a little bit underdeveloped. There’s lots and lots of mention about how he is the most powerful Grisha in the world but I couldn’t really see what made the Darkling so special. From what I gathered, his only powers are summoning darkness and amplifying the other Grishas’ powers. I honestly have no idea why that makes him special, aside from the uniqueness of what he can summon.

Mal was a character that I disliked at the beginning of the book but ended up really liking by the end. Initially, he came across as an uncaring player but eventually turned out to be a gentle and caring friend. Even though it was a little bit frustrating that Alina was constantly pining over Mal, I really liked the two of them together. I also really liked the Darkling and Alina together, and thought it was interesting that their powers are polar opposites. At this point, I don’t really have a preferred ship. I loved Alina and the Darkling but I also enjoyed Alina and Mal together.

My biggest issue with Shadow and Bone was its plot and the development of its story arc. This is a slow-paced book (which I have nothing against) that contains bursts of action at the beginning and end, and long periods of inaction in between. We start off with the conflict in the Fold that reveals Alina’s Grisha powers and I loved the action and the excitement of this first section. However, there’s really nothing that happens for the next 200 pages until we reach the climax of the novel. The whole middle section was dedicated to world building and developing the romance, and I just needed some more action to fully engage me.

There were a couple of twists in the book but I found them to be mostly predictable. I was expecting the twist about the Darkling, simply because I’ve heard most people talk about the Darkling in a certain light. I definitely wasn’t surprised at all when his history was revealed. I also wasn’t surprised by what happened at the end of the book – I had subconsciously expected it to happen.

Overall, I thought Shadow and Bone was kind of average. I really enjoyed the world but I felt that we didn’t get to see everything that it had to offer. There’s definitely potential to develop the world further. The characters were a little bit lacklustre and boring, and the plot was predictable and didn’t offer me any sense of surprise or intensity. It was my no means a bad book and I think I can still recommend it to fantasy readers.

32 thoughts on “Review: Shadow and Bone by Leigh Bardugo”