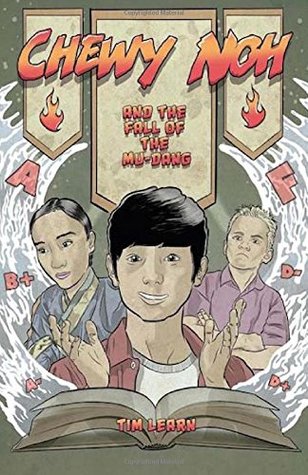 Chewy Noh has problems. He was born with them. Two weeks after his birth, the family fortune-teller saw bad things in his future…and she was right. The school bully hates him and will stop at nothing to get rid of him. His mother suddenly can’t get out of bed, complaining of horrible headaches. And worst of all, the secret his grandmother is hiding may be at the root of it all. But why should he worry? He’s a superhero with a power no one’s ever seen before!

I received an electronic copy of this book from the author in exchange for an honest review. All thoughts and opinions are mine.

Chewy Noh and the Fall of the Mu-Dang is the first book in a middle-grade series by Tim Learn. This will be a five-book series, with two books released so far (A review for Book 2 will be up in a couple of days).

When the author asked me if I would like to read and review Book 2: Chewy Noh and the Phantasm of Winter, I was a little bit hesitant to accept because I had a whole pile of ARCs from big publishers that I was trying to get through, and reading two more books seemed like a massive task I did not want anything to do with. But after reading the description for the book, I knew I had to read this series! It’s full of fun and adventure, and I would have loved this book as a pre-teen reader!

Chewy Noh is a Korean boy who recently moved from South Korea to the US with his mother. He’s incredibly smart and gets perfect scores on all his tests. But what you don’t know is that his ability to perform perfectly on tests is a superpower that he has been granted by a mu-dang (a Korean shaman/fortune-teller). His power starts to make him some enemies at school and these bullies will do anything to get Chewy kicked out of school. On top of that, there are some family secrets that are causing strange changes to his mother and his life.

I thought this book had a really fun and exciting plot. I loved how adventurous it was and I really enjoyed being along for the ride. The book was so packed full of action and had me wondering what would happen next. There were times when I thought the transitions between events could have been smoother – I felt like sometimes I was being jerked from one event to the next. This was probably a result of there being too many plot lines. It was a little bit hard for me to follow all of them and integrate them. I was just a bit confused at times about what was happening and why it was happening. There was also a little bit of unnecessary information at times, or descriptions of mundane events, which made the book feel very long. I think it could have been a whole 100 pages shorter.

The book had some chapters set in the past, describing the family’s history and secrets, and I thought these were some of the most interesting chapters because we got to see a lot of Korean culture. The book also transitioned very seamlessly from ‘past’ chapters to ‘present’ chapters. But there were also some chapters (mostly in Part 2) that all ended on cliffhangers, which I didn’t really like. It made the book feel overly dramatic and I didn’t think it needed to be that way.

The writing in this book was very easy to read, and I flew through this in about 3 hours. This book suffers a little from lack of editing, probably due to it being a self-published work. The writing isn’t as smooth and polished as I’m used to but I didn’t have too much of an issue with it since it’s a middle-grade book that’s supposed to be about the characters and their adventures. As long as there isn’t a huge number of typos, I’m fine with a little bit of weird grammar and awkward sentences.

I loved our main character, Chewy, and his best friend, Clint. They have such a great, supportive friendship and I really enjoyed the scenes where they were together. But other than those two characters, I didn’t really like anybody else in the book. Our bullies are terrible people and behave in ways that I could’ve never imagined. I’m glad I’ve never met anybody like them. They were really hateful and manipulative and I just found them to be despicable and their behaviour was honestly disgusting. The problem that I had with all of the characters was that they seemed to be a lot older than they actually were. They’re supposed to be fifth-graders but they say and do things that I would expect from much older kids. It just wasn’t believable and I almost had to imagine that they were high schoolers instead (I also hope that no 11 year old is capable of doing the things that these kids do in the book).

Overall, I really enjoyed this book. It had a lot of things that would appeal to a middle-grade audience, as well as an older audience too. It was action-packed and has some diverse characters that you don’t see in very many books. If you enjoy reading about superheroes and their adventures, I think you would really like this story.

13 thoughts on “Review: Chewy Noh and the Fall of the Mu-Dang by Tim Learn”