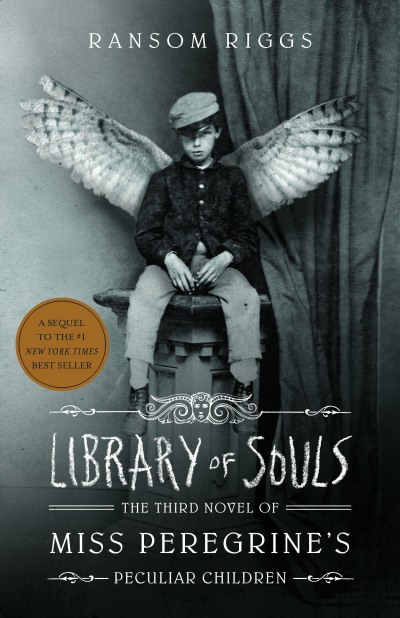 This review doesn’t contain spoilers for the first two books in this trilogy, so feel free to stay if you want to hear my thoughts on what I think of this finale to the trilogy! I also have reviews on Miss Peregrine’s Home For Peculiar Children and Hollow City. I’ve put the synopsis for Library of Souls at the end of this review so you won’t be spoiled accidentally 🙂

I thought Library of Souls was an amazing finale to the Miss Peregrine’s Home For Peculiar Children series. There was action on every page and I just found it to be very fast-paced and engaging. I finished this 460 page book in just two sittings. There were so many great things about this final instalment and it was definitely just as enjoyable as the first two books. It wasn’t as creepy and eerie as the first two books – it’s more dangerous and action-packed – but just as good!

First, let’s talk about the plot. Just like the first two books, Library of Souls starts off with a bang. We have an epic action scene from the very first chapter and it was one of my favourite parts of the book. It was extremely exciting to see our main character, Jacob, learn about and embrace his abilities, and it was even more exciting to see him put them to use. As with Hollow City, this third instalment keeps up a consistent level of action and excitement that had my heart racing for most of this book. The climax had me on the edge of my seat and the last 150 pages were so incredibly intense and amazing that I just devoured it. The only thing that I didn’t enjoy about the plot was that the twist was a little bit predictable. The little hints that we received weren’t as subtle as they were in Miss Peregrine’s and Hollow City so I had kind of expected it. It just didn’t have the same shock factor that the first two books had.

Another thing that I missed in this book were our cast of regular characters. I had enjoyed them so much in the first two books and I really missed their presence and their idiosyncrasies in Library of Souls. The novel definitely got better for me when they finally appeared in the second half of this book. I did enjoy the addition of some new characters though and they filled the void I had in my heart 😀

I really loved the intricate world that Ransom Riggs has created. We get to learn a lot more about time loops and time travel in this book and I think some of the lingering questions I had were answered in Library of Souls. I also loved the idea of the Panloopticon and thought it was extremely interesting. The nerd in me was loving the Panopticon reference and I also love that Ransom Riggs incorporated the inventor of the Panopticon, Jeremy Bentham, into his story (as a pretty major character as well)!

As with the first two books, I loved the setting and world. In Library of Souls, we’re taken to the dirty slums of Victorian England, which is one of my favourite, favourite, FAVOURITE time periods. The photographs acted as wonderful visual aids that enhanced the image of the setting in my head. I thought the photographs were so wonderfully used in this book. None of them were unnecessary and I think I enjoyed this set of photographs the most out of the three books (though I really love the photos in Miss Peregrine’s too because that was the start of the whole journey).

I thought Library of Souls was a fantastic ending to the trilogy and Miss Peregrine’s Home For Peculiar Children is a fantastic series overall. What I loved about this final book was that everything was resolved. We get a proper ending and we get to see what happens to Jacob when all the dust has settled. There were a few things that I thought were too conveniently resolved but I’d rather have a happy and completely resolved ending than an open-ended one. And the ending scene was such a satisfying one.

The adventure that began with Miss Peregrine’s Home For Peculiar Children and continued with Hollow City comes to a thrilling conclusion with Library of Souls. As the story opens, sixteen-year-old Jacob discovers a powerful new ability, and soon he’s diving through history to rescue his peculiar companions from a heavily guarded fortress. Accompanying Jacob on his journey are Emma Bloom, a girl with fire at her fingertips, and Addison MacHenry, a dog with a nose for sniffing out lost children.

They’ll travel from modern day London to the labyrinthine alleys of Devil’s Acre, the most wretched slum in all of Victorian England. It’s a place where the fate of peculiar children everywhere will be decided once and for all. Like its predecessors, Library of Souls blends thrilling fantasy with never-before-published vintage photography to create a one-of-a-kind reading experience.

Have you read Library of Souls? I’d love to discuss your thoughts and feels with you! But try to keep it spoiler-free!!

19 thoughts on “Review: Library of Souls by Ransom Riggs”