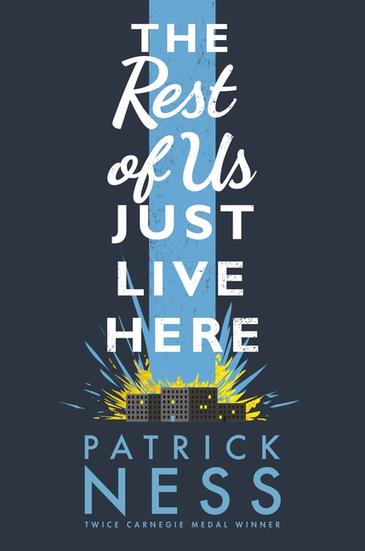 Not everyone has to be the chosen one.

The one who’s supposed to fight the zombies, or the soul-eating ghosts, or whatever this new thing is, with the blue lights and the death.

What if you were Mikey? Who just wants to graduate and go to prom before someone goes and blows up the high school. Again.

And what if there are problems bigger than this week’s end of the world and you just have to find the extraordinary in your ordinary life?

The Rest of Us Just Live Here was my very first Patrick Ness book and I really enjoyed it. It didn’t blow my mind (like I was promised), but I’ve been told that this book is very different from his other books so I’m still looking forward to reading more Patrick Ness.

This novel is about the other kids that appear in YA novels – the ones who aren’t special or have superpowers. They’re the ones who are in the background while the chosen ones or the “indie kids” go and save the world. And they’re the ones with the ordinary names. I really liked the concept of this book and being able to see the ordinary things that go on while the indie kids are battling whatever force is threatening the world. This book reads like a contemporary but has some fantasy/paranormal elements running through it, like zombie deers and the God of cats.

Each chapter opens with a paragraph summary of what is happening to the indie kids, or what the novel would be like if it was written from the perspective of an indie kid. I liked these summaries a lot because we got to compare and contrast what was happening to them to the normality of the rest of the world. We get to see the consequences of what happens in the “indie world” and how it affects all the normal folks. I loved the satire and how the book makes fun of things like the adults being unaware of the strange happenings even though they were teenage, non-indie kids once too. I enjoyed picking out YA tropes and seeing how ridiculous Patrick Ness would make them seem.

This is very much a character-driven book because there isn’t really much of a plot. Our main character, Mikey, just wants to get through the last 4 weeks of school and graduate with his friends. I really liked and connected with Mikey’s character. I thought he was endearing and I liked how ordinary he was. But even though he’s an ordinary guy, he still has his own problems, like the OCD he suffers from. I thought the OCD aspects in this book were handled really well and it felt very realistic. He was a great friend and a great brother – I loved reading about his relationships with the other characters. His relationships with his sisters were my favourite aspect of the whole book.

I loved most of the other characters. Jared was probably my favourite, after Mikey, because he was such an intriguing and unexpected character. Like, come on, he’s the God of cats! He was a really great friend to Mikey, helping him out of his compulsions. There were a couple of things towards the end that I didn’t like about Jared but I still ended up loving his character. I also loved both of Mikey’s sisters. The character that I had reservations about was Henna, the friend Mikey has been in love with since forever. I didn’t really see what was so special about her and what he saw in her. And since a lot of the book is about Mikey and him dealing with his feelings for her, I felt a little bit blah about it.

I think I might have liked the book a little bit more if it had more of a plot. While it was never boring, I didn’t think it stood out in any way (and maybe that was the point, because it’s a book about the ordinary and not chosen). I really enjoyed what I read (enough to give it 4 stars) but I just didn’t think it was particularly exciting.

21 thoughts on “Review: The Rest Of Us Just Live Here by Patrick Ness”