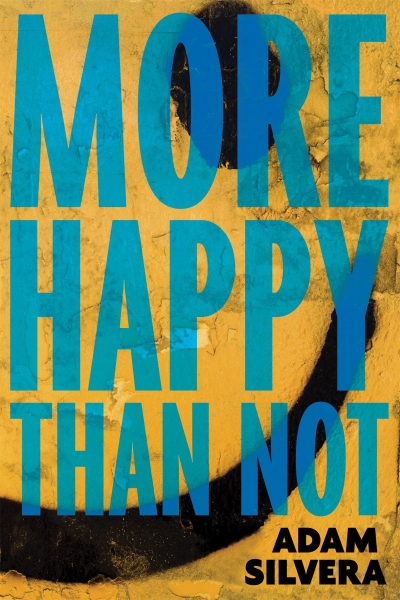 The Leteo Institute’s revolutionary memory-relief procedure seems too good to be true to Aaron Soto – miracle cure-alls don’t tend to pop up in the Bronx projects. Aaron could never forget how he’s grown up poor, how his friends aren’t there for him, or how his father committed suicide in their one-bedroom apartment. Aaron has the support of his patient girlfriend, if not necessarily his distant brother and overworked mother, but it’s not enough.

Then Thomas shows up. He has a sweet movie-watching setup on his roof, and he doesn’t mind Aaron’s obsession with a popular fantasy series. There are nicknames, inside jokes. Most importantly, Thomas doesn’t mind about Aaron’s past. But Aaron’s newfound happiness isn’t welcome on his block. Since he can’t stay away from Thomas or suddenly stop being gay, Aaron must turn to Leteo to straighten himself out, even if it means forgetting who he is.

More Happy Than Not is a coming-of-age LGBT book, with some sci-fi elements that are reminiscent of Eternal Sunshine of the Spotless Mind. It is by no means an adorable, feel-good book like Simon vs the Homo Sapiens Agenda. More Happy Than Not is a dark and heavy book that also deals with depression and suicide, as well as homophobia and hate crimes.

I have to admit, I did not like this book at all when I first started reading. For the first 100 pages, I was just not into the book. I couldn’t connect with the writing or the characters  and my attention just kept wandering away. I didn’t like Aaron or Thomas, and I thought Aaron’s friends were absolutely ridiculous and not the kind of people you’d want in your life. I actually almost gave up on the book. But then the story really picked up when we got to the next section of the book, where Aaron’s character starts making self-discoveries and accepting himself for who he is. From that point on, I was hooked. My rating immediately jumped from 2 to 5 stars. I ended up giving it 4.5 stars because of those first 100 pages, but I was so emotionally affected by the story that it feels like a 5 star book to me.

Adam Silvera has written such a heart-wrenching story about a boy who is unable to be himself because he doesn’t have the support system that he needs. His whole life, he’s been surrounded by people who tell him not to be gay. I think this is a book that everybody needs to read. It delves into the complexities of sexuality and self-identity. This isn’t just a coming out story – it’s so much more than that and I don’t think I have the proper words to describe it. But while this novel is sad and emotional (and made me cry lots and lots), it is also full of hope. It really sends the message that you don’t have to change yourself or forget the negative or ‘unwanted’ parts of yourself in order to find happiness. Because happiness comes from just being who you are.

For those of you who are looking for a romance or a love story, you’re not going to get that in this book. This is a novel about coming out to yourself, forging healthy relationships and dealing with pain. I highly recommend this beautiful novel. The first 100 pages might bore you to death and the story might break your heart, but it’s so worth it.

5 thoughts on “Review: More Happy Than Not by Adam Silvera”